I forgot to mention that we stayed at the Willabee Inn in Brimley while we were visiting the Upper Peninsula (UP).  The hotel is about 45 minutes from the airport in Sault Ste. Marie.  The hotel was named after the Russian Terrier dog that the original owners brought with them from Russia and the current owner still have a Russian Terrier that hangs out in the office.

The room wasn't grand, but it was sufficient for our needs.  It was clean, the bed was comfortable, we had a small refrigerator in the room and was very affordable.  I loved that fact that the window could be opened, no stuffy hotel room.  The window was open to air the room out when we arrived.  It was a nice thought for the staff to air it out for us.  Matt's sister felt her room was damp but she was the only one of the family that stayed there that thought so.

Our room was on the first floor next to the office and we had no problems with noise.  They had plastic lawn chairs outside of the rooms and we definitely used them and enjoyed sitting outside visiting with Matt's family.  There was also a dock behind the motel, between the restaurant and motel actually, that we used for a hang out in the evening.  Unfortunately the hotel was closed but they told us that it had just been bought and would be reopening again.  It would have been nice to have had breakfast without having to drive.  We typically kept our window open at night but after several nights of a group of dogs barking incessantly throughout the night we kept it shut.  It sounded to me like a kennel of some type.  Someone thought it was coyotes but it didn't sound like coyotes to me.

I think everybody there would say that the Dancing Crane Coffee house was the best hangout place.  Each time we stopped there for breakfast we ran into several other people attending the wedding.  It was a wonderfully cozy cafe with games and books scattered throughout to enjoy as well as a nice variety of products to purchase.  Matt and his sister Bee played cribbage while we enjoyed a lazy last morning there before we flew home.  Everybody said the coffee was superior in quality.  As I don't drink coffee I'll take their word for it.  The wedding couple actually had a special blend roasted and gave away small packages of it for wedding gifts. They had fabulous cinnamon rolls. 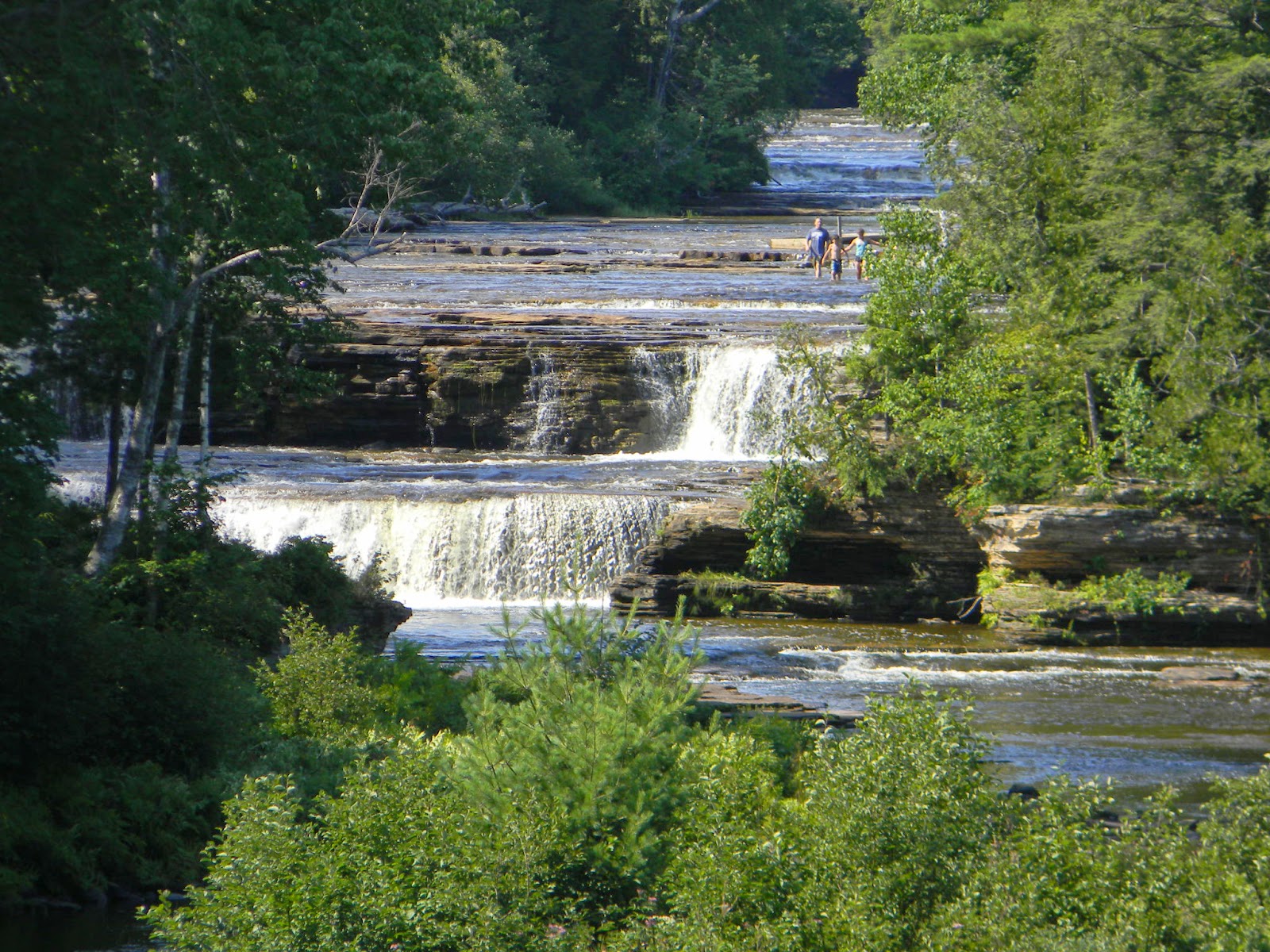 Tahquamenon Falls was beautiful!  We visited both the lower and upper falls.  Matt wasn't up to walking the 4 miles between falls and back again so we were wimps and drove.  This is a picture of the lower falls.  If I recall right there are 5 falls total.  The path to the falls is nicely done with timbers and made walking a lot easier.  There were several people in wheelchairs that were able to get to the falls due to the wooden paths. 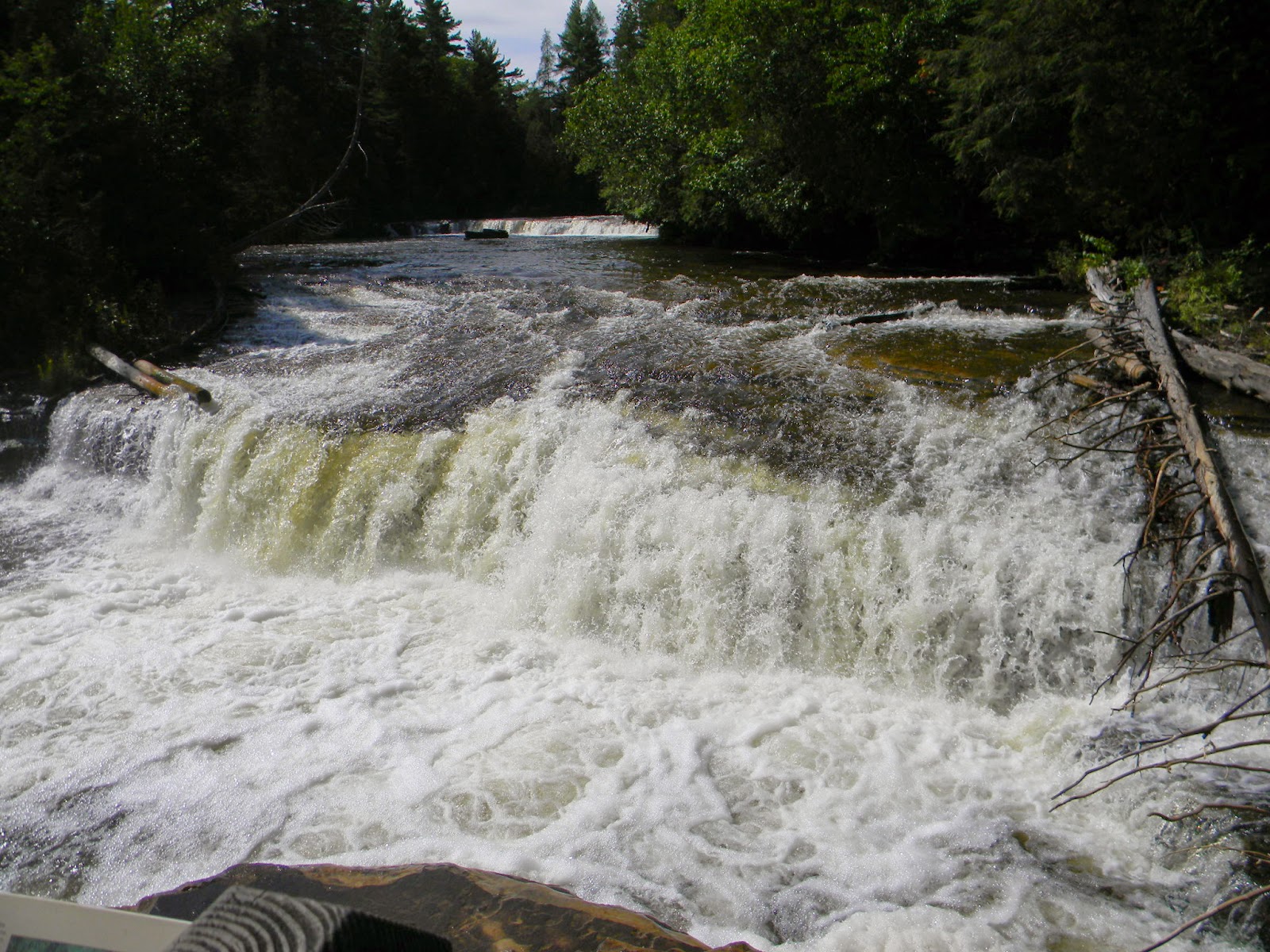 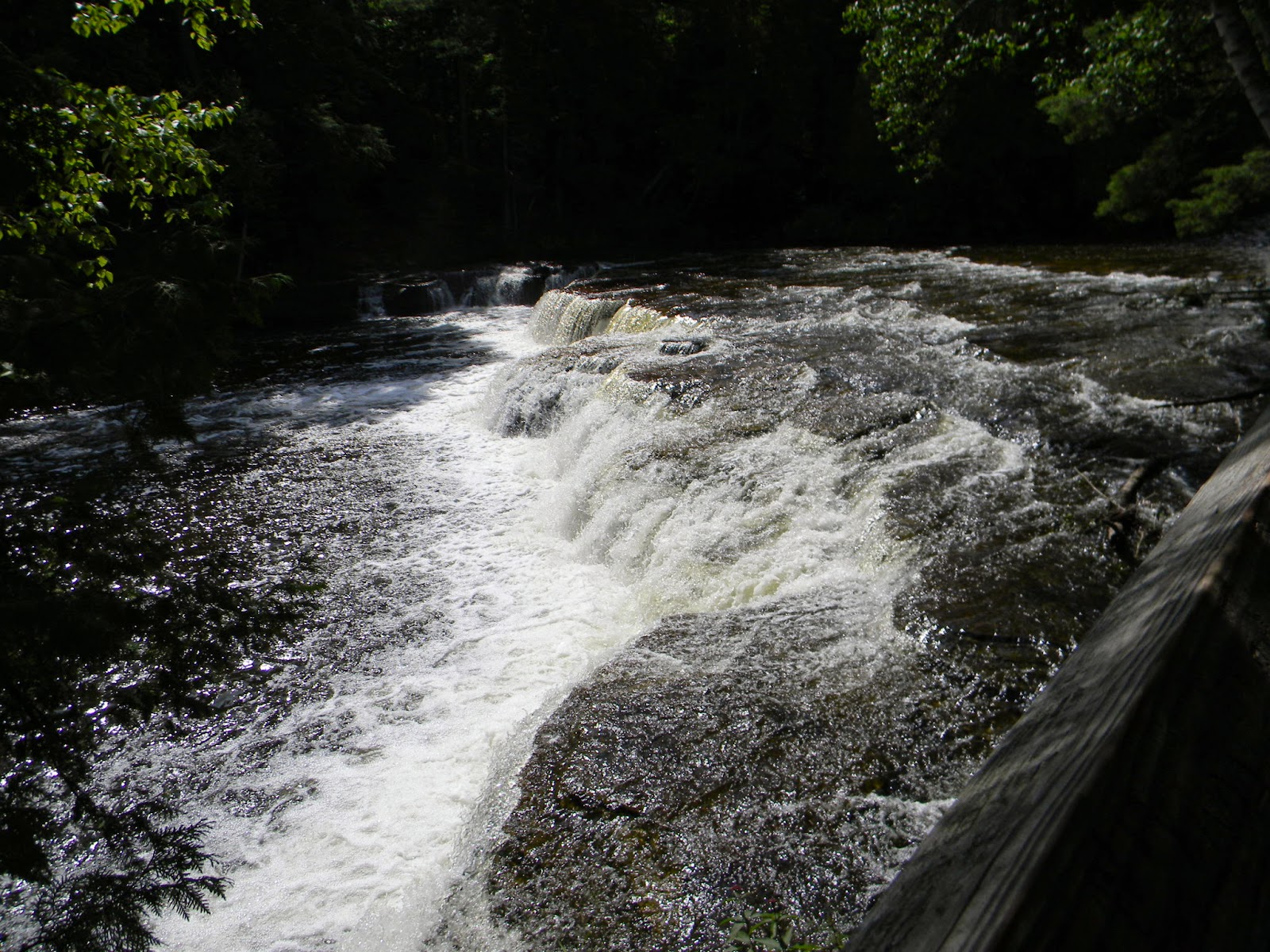 They had some nice landings to take pictures.  This is part of the upper falls.  It was breathtaking.  We did wonder why the area wasn't being utilized for hydro power. 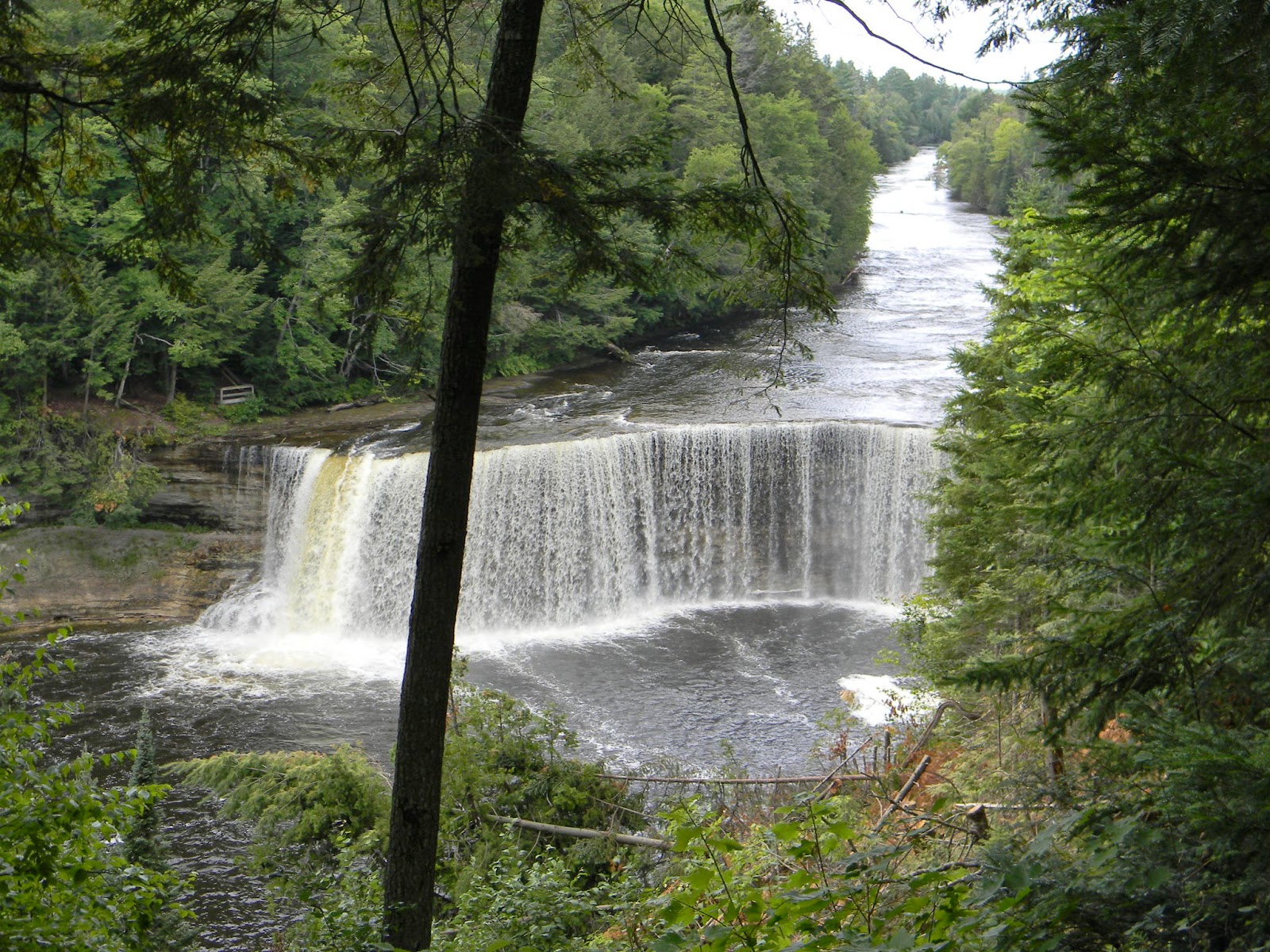 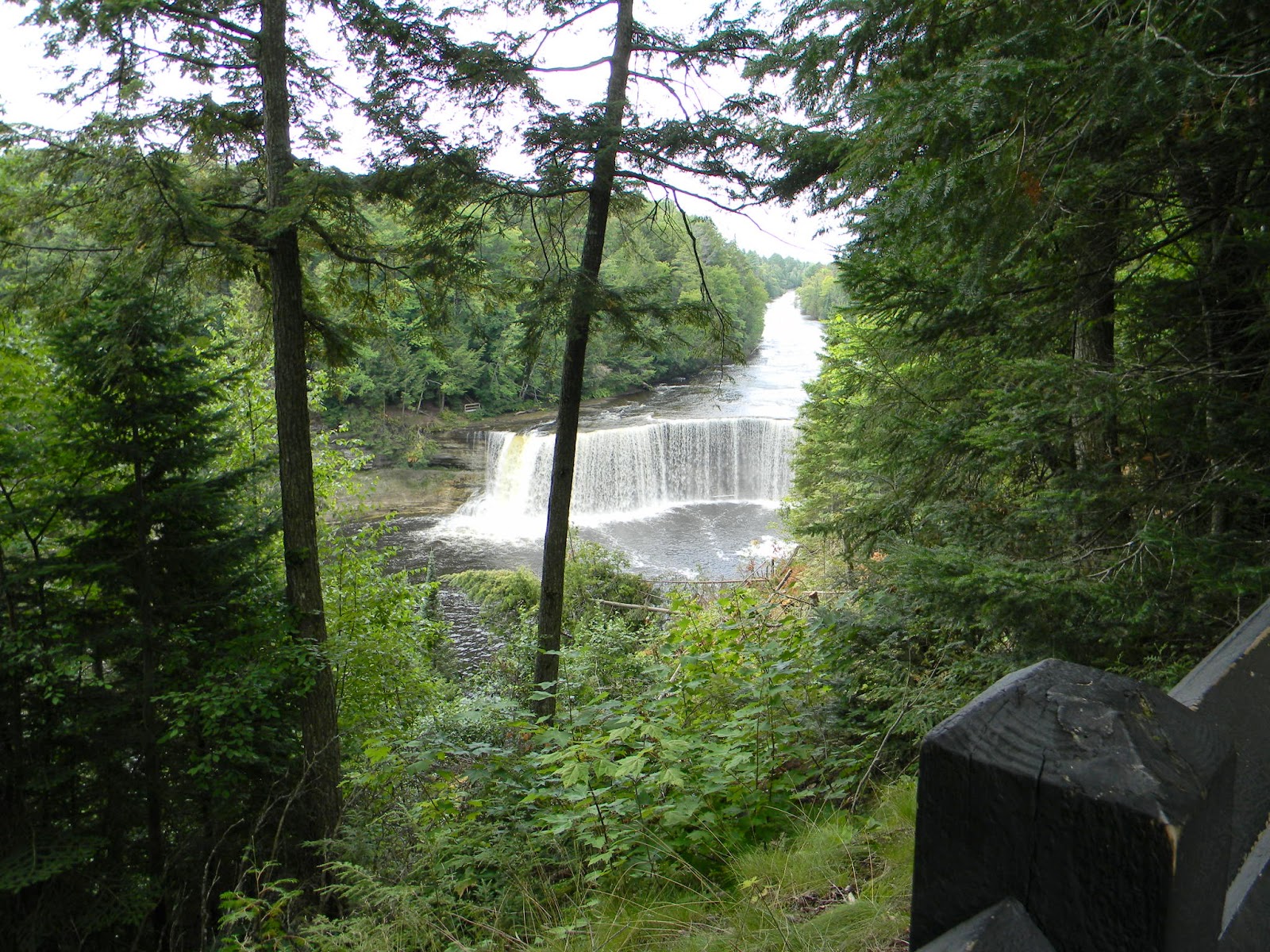 After all our walking we were hungry and thirsty so we checked out the Gift Shop and bought a light lunch.  We were a little disappointed with the gift shop as Matt found a tshirt he liked but they didn't have it in his size.  It takes a genius to put a brewery at the end of a hiking trail and Matt wanted to try  a beer at the Tahquamenon Falls Brewery.  I tried their root beer.  He chose the blueberry wheat ale.  This ale had a really strong blueberry scent although a light flavor to it.  It smelled so good that I actually tried a sip of it.

After our adventurous day we were both hungry and wanted some fresh fish for supper. Another one of Matt's sisters and her family had arrived so we went out to the Wilcox Fish House for fish dinners with them.  I tasted Matt's whitefish and it was superb.  I ordered perch which was good but after tasting the whitefish I regretted not getting it instead.  Matt says you can't beat fresh whitefish from Lake Superior and I have to agree with him.  Matt and I both ended our meals with a piece of  warm strawberry rhubarb pie with ice cream. It was the perfect ending to the meal.  I haven't had a strawberry rhubarb pie since my grandmother made them when I was a child.  I think I may have to plant some rhubarb or raid somone's patch next spring so I can make some myself.  Every time we drove by Wilcox's I drooled just thinking of their pie.

And so ended the second day of our adventure.