I hope everybody had an awesome Thanksgiving.  We took Jasper with us to Indiana for Thanksgiving.  I'm so impressed with how well he did for being in the car so much.  The trip each way was nearly 1000 miles plus all the driving we did while there.  After getting caught in rush hour traffic in Minneapolis on the way there for nearly 3 hours, Mr. B was adamant we were going nowhere near a large city on the way back.

It was nice to see the family again.  My aunt has been ill off and on for nearly a year now, including several hospitalizations, so it was important to get home and see her.  My uncle came up from Alabama too.  With my brother and his family and sister and her family, we were a gathering of 15 around the Thanksgiving table.  My uncle gifted us all with homemade jellies and apple butter (yum).  The jellies were made with beet water as a base.  I'm loving the black raspberry beet jelly.  Even Mr. B has been eating it, I just haven't mentioned the beet part.  He also did a peach beet jelly that he used yellow beets to make.  As I said, I just won't mention the beet part.

Wow, Plymouth has changed.  It's been probably around 8 or 9 years since I was last there.  I swear it doubles in size each time I go back.  I wanted to take the lil dude over to the park but unfortunately, it rained Saturday and I wasn't able to.  He could really have used some serious playtime with all the driving.  I loved the park and spent most of my summers playing there. I loved walking my dogs along the trails by the river.  The city pool was also located in the park and I spent a lot of time there also.  Mom still remembers one of the last times I was back and my spending so much time in the park walking them. Man do I miss those pups, I sometimes wonder if the heartache of losing those 3 pups will ever lessen. 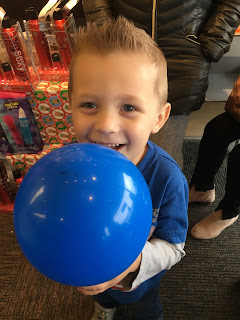 On Friday we drove down to Monterey and showed Mr. B where I lived.  First, we had to stop and get a haircut for the lil dude as my son hadn't gotten it cut like I'd requested him to.  He looked adorable afterward. We drove by Culver Military Academy and drove around the lake.  I don't think I've been to Monterey since I was about 10 or so years old.  Some things have changed as you can imagine but yet surprisingly some were the same.  I remembered the bar, the post office, the school, and the library.  I hadn't realized the school there had closed. We also drove by the farm.  Mom had told me my step-uncle had stopped milking cows but I hadn't realized he'd torn down most of the milking barn.  It looked so different! 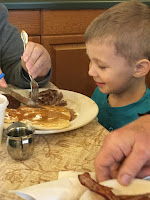 Saturday morning we gathered in Walkerton at the Corner Cup Cafe for a family breakfast before my brother and sister headed home.  Jasper made us all laugh because he kept telling everybody he wanted pancakes and he ate the whole entire thing when he got it. He definitely put away a hearty breakfast.

Afterward, we headed over towards Breman to a store called Rentown.  It's an Amish owned and run store.  I wish we'd taken the truck so I could have loaded up with supplies there to bring back!  The prices were crazy low compared to what I have to pay here in North Dakota.

Jasper saw an Amish woman putting out cheese into the cooler and went over and picked one out.  I cut it up for us to nibble on for the drive home.  After Jasper took his first bite of the cheese he'd chosen he grabbed the whole container and said "mine!"   I grabbed some German-style bologna for Mr. B.  I bought a package that was at least a pound for less than $3 - it cost me $5.50 for a package at the store the last time I bought bologna at the store.  I picked up several spices and herbs that I knew I needed.

Our next stop was a little scratch and dent store in Wakarusa, also Amish owned and operated.  I picked Jasper up some of the gummy fruit snacks for $1.50 a box.  Mom and my uncle picked up several things while here.  I knew we didn't have a lot of space so I didn't buy very much.  My uncle bought my mom a case of grapefruit for $13.  My uncle stocked up on stuff to take back with him at both stores.

Our last stop was at another Amish business, Kuhn Orchard, to get apple cider, the real stuff - not the store pasteurized stuff.  I bought honey as well and my uncle picked up some pickles, honey and apple cider vinegar. 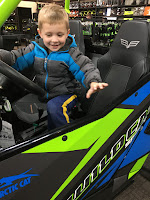 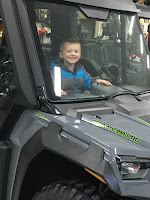 We headed home on Sunday morning.  We didn't leave super early but were on the road by 9 am.  We stopped in Mankota for the night.  At least we didn't run into a blizzard going home like we did going.  Mr. B wanted to stop at Country Cat in Sauk Center, Minnesota.  I'm not sure who had more fun Jasper or Mr. B.  Mr. B was eyeing an equipment bag and I told him to get it.  It's large enough it should fit both our stuff in it.  It will make it a lot easier to just be able to grab the bag when we go snowmobiling instead of having to grab everything individually and carry everything out.  Easy to forget things so this bag will be great so we don't forget anything.