I finally got to do some gypsy style wandering. We just returned from our trip to the Upper Peninsula of Michigan (aka UP). Matt and I attended his niece's wedding. In addition to attending the wedding we took day trips every day to check out the area. By the time we left I was praying for a rainy day to rest a bit.

Our first trip was to Mackinac Island. To get to the island you have to go by boat or ferry. We took a hydro boat which was about a 30 minute trip each way. There are no cars or motorized vehicles allowed on the island. Deliveries are done by horse and wagon. The only forms of transportation are walking, horseback, horse & carriage, and bikes. This was definitely not a cheap day trip although we definitely felt it was worth what we paid. If we were to do it again I'd like to go more prepared with packed lunches,our own water and probably rent or take our own bikes as you can bring them across on the boat for a fee. We did not eat on the island as the prices are pretty high. Fortunately we had a large breakfast right before leaving for the island so we weren't really hungry although we did buy ice cream cones at the Sanders Store as a treat. If you can afford to stay on the island it would be worth it to see things at night as well as having more time to explore.

Many of you may remember the movie Somewhere in Time with Christopher Reeves and Jane Seymour. The Grand Hotel that the movie took place at is located on this island. The hotel is absolutely awesome looking. It's huge!  It has the longest front porch of any building. The grounds on this entire island are spectacular and even more so around the hotel itself. We paid to be able to go into the hotel but sadly it didn't really allow us to see much. We did go up to the bar at the top and that has a spectacular view, perfect to sit and sip a class of wine and enjoy. I did purchase some teas in the Tea Shop in the indoor shopping area. The views from the porch are spectacular as well and I could have sat in one of the rocking chairs all day reading and enjoying the view.


We took a carriage tour around the island. I thought it would be the best way to get an overview of everything and then we could go back and investigate areas that caught our interest. We did a combination ticket so we could get into the Butterfly Conservatory. The Butterfly Conservatory was breath taking. I'll admit I've never been in one before so this was my first experience. The cottage that the conservatory is attached to is adorable. I could die a happy girl in the gardens here. On our way back from The Grand Hotel we took a little alleyway and discovered a beautiful garden that had a sign The Secret Garden in it.  The flowers were so beautiful I can't describe it. I thought we'd taken a picture of it but unfortunately not.

Matt kept telling me to hold still and I couldn't figure out why until he told me I had this fellow on me. Glad he took a picture so I could see it.


The roof on this building caught my eye. I've never seen anything like it before. It looked like pieces of peeled bark with the the pieces of stripping across to hold them secure. Really unusual. This building wasn't open so I'm not sure what it was originally used for. It might have been a cottage someone lived in. 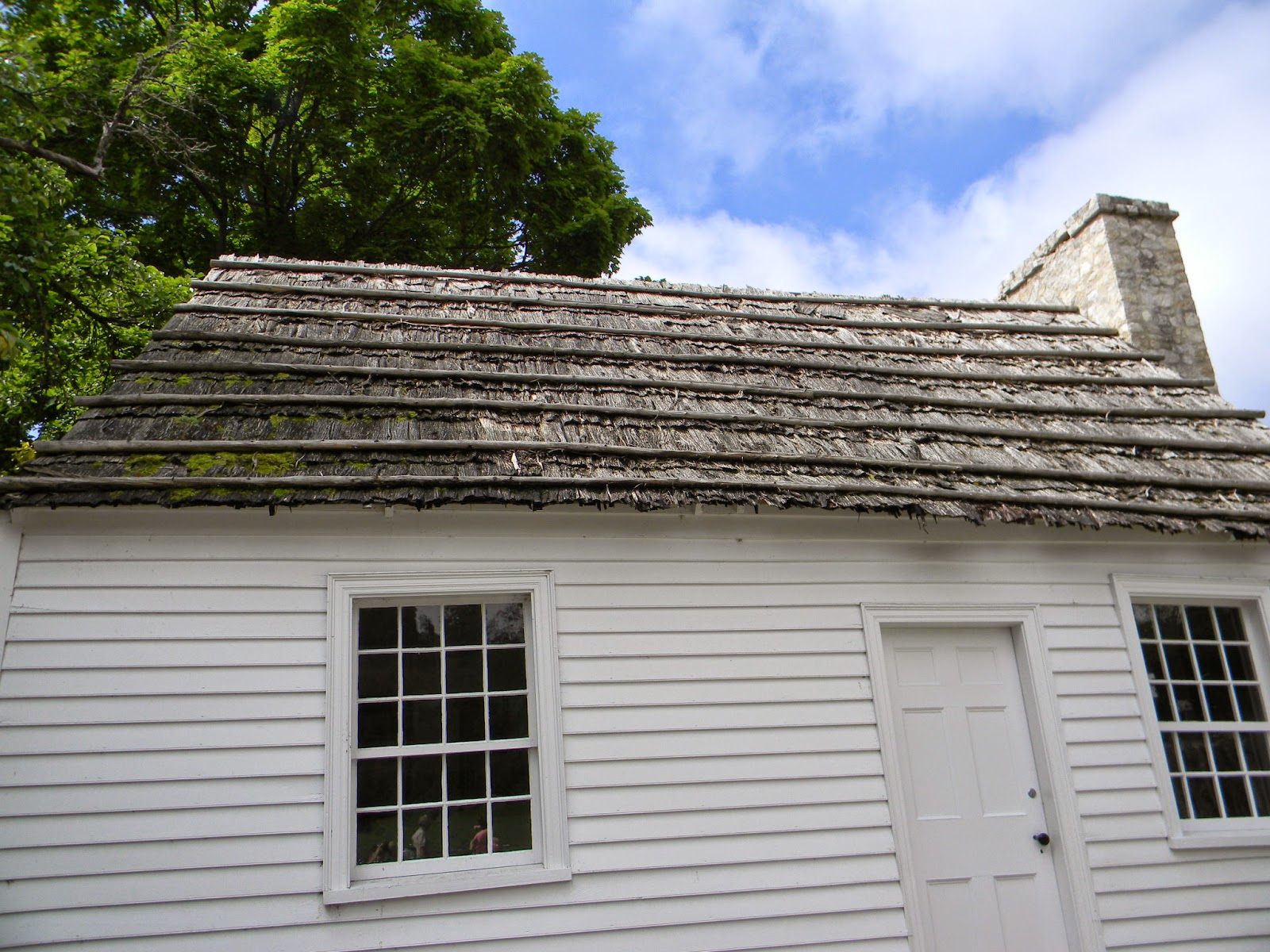 This is where hunters and trappers could bring their furs to exchange for merchandise when the island was first settled. The furs were kept in another building. 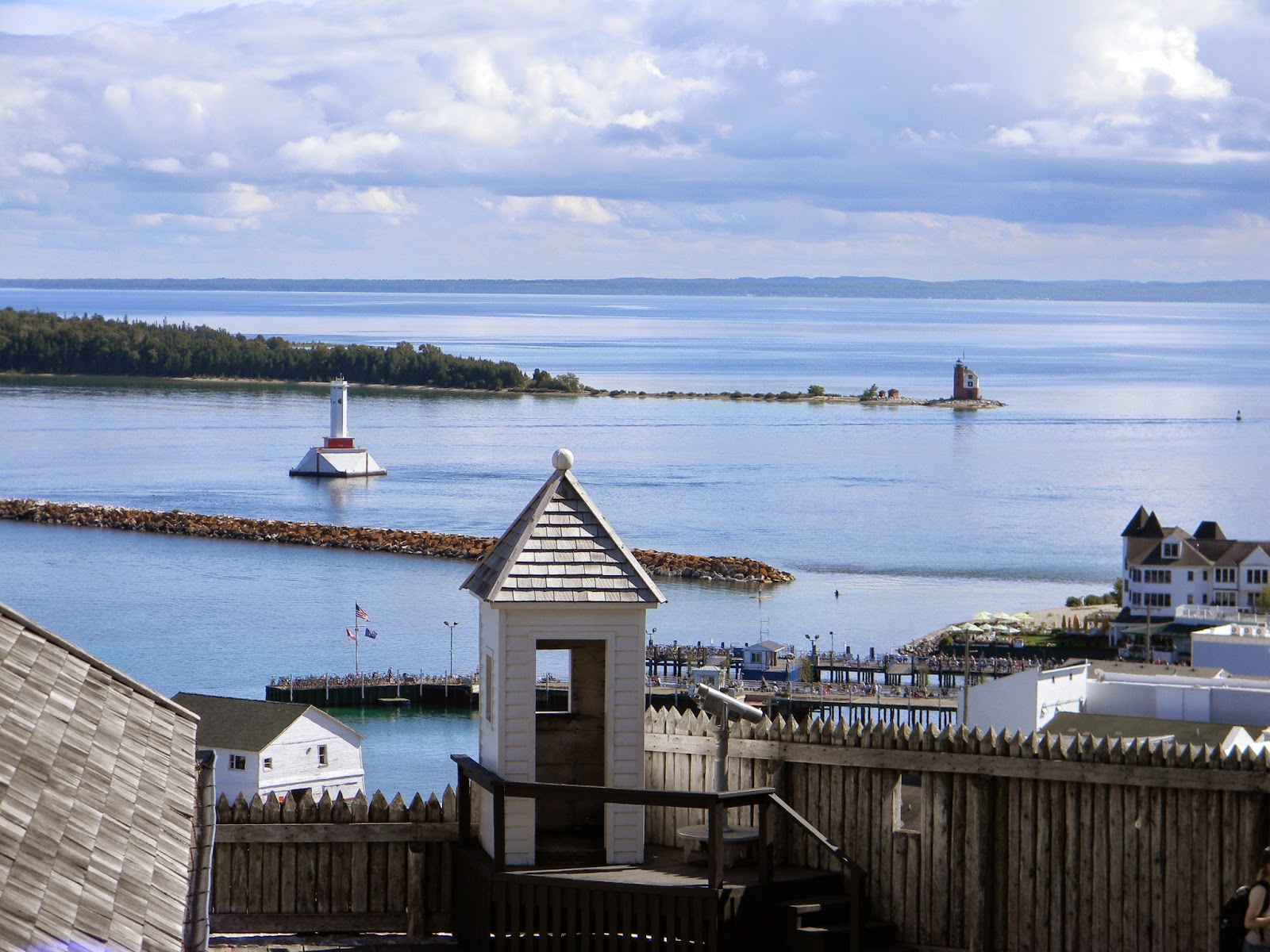 This is the view from Fort Mackinac. I wish we'd taken pictures of the office quarters because one thing we both noticed was how grand the living spaces were furnished, especially for the time period. For a layout of the Fort please follow the link above.

While on the carriage tour we went through Mackinac State Park and got to see the Arch Rock.  There are several theories on how this developed but I like the story of the Indian Princess and the Air God that our driver told. Unfortunately I can't find the legend online so briefly the Indian Princess fell in love with an Air God.  Her father didn't approve of the match so to prevent it he took her to this rock and tied her to it and left her there to the elements. She cried and cried and her tears washed away the stone until this arch was made. The Air God found her and saved her. It is said that the Air God went through the arch and became a human male. I'm a sucker for romantic endings.  As you look down into the water just past the arch you can see the picture below. Nobody knows who wrote it.