It has been a busy couple weeks for me. I've had to be in the office several times in the past couple weeks for training and I've been picking up some extra hours at Walmart. With the vet bills being so high lately I need some extra income. In addition, Mendards finally opened here in Jamestown!  I'm so excited. I hadn't been over to check it out as the crowds have been insane so Matt took me over Saturday for my first look. The place is HUGE. They built this one to be the Midwest hub and therefore it's the largest one in the Midwest now. Menards being open is another reason for needing extra income. We can finally start some of the renovations on the house that need to be done. We picked up an ice maker installation kit and a new water filter for the fridge. We've had repeated problems with the ice maker not working. Whoever installed it kinked the copper line so Matt's replacing that and the filter was due to be replaced. It's so nice to have some place we can buy the supplies now when we need them instead of having to order them online or drive 100 miles to get them. Next will be new flooring in my office area!


Tip has actually been doing well and is stabilizing out from the phenobarbital. He has an occasional wobble of the hind legs but otherwise has been doing well. No seizures thankfully. Because the medication makes him hungry, we have to be careful when leaving the house that nothing is within reach that he can get. He's pulled cast iron skillets off the stove while we've been gone to lick them. The idiot pulled a bag I left on the counter down and tried to eat a grow pod for cilantro I'd bought to replant. Nothing is safe so it's like kid proofing the house again, except it's furkid proofing.

I nearly lost my beloved Oreo last weekend to a GI infection. I initially thought it might be cardiac failure as she was wheezing a bit. She will be 16 years old next month so as much as I hated the thought of losing her, I can't deny it's not going to occur at some point. She stopped eating last Friday. I tried everything I could think to get her to eat something. I even went to McDonald's and bought some french fries and she turned her head away from them she was so sick. Last Saturday she wouldn't even come out of the bedroom. I'd worked all day last Saturday so didn't realize her condition until I got home that night. She did show more interest Sunday and came out of the bedroom but still wouldn't eat. I honestly didn't think she'd make it but she's resilient and after the vet gave her an anti-nausea shot and some medications along with a special food for intestinal issues on Monday she's make a nice recovery and is begging to eat to make up for those days she didn't.


I started sanding the desk this weekend and got the first coat of stain on most of the desk before I ran out of stain. I had so much stain left over from my table and chair project that Matt and I figured a small can would be more than enough. I'll be making a run to Menards today to buy a larger can and plan on finishing the area that I didn't get to last night and then hopefully do a second coat later tonight after doing a light sanding. I had originally bought an antique walnut stain to use because my selections were so limited at Walmart but after seeing a picture on Pinterest of someone's redo of a table using mahogany stain I decided to go mahogany instead. Matt wasn't too sure about the mahogany until he saw the rich color after the first application and he really likes it.  It's such a nice rich, warm color. Pretty much my entire day Sunday was spend sanding the desk down. I used an electric sander for the first time and boy did my arms and wrist feel it that night. Thank goodness for Motrin. 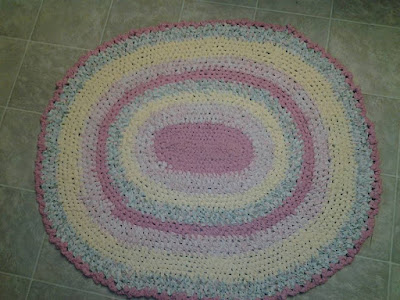 I finally finished the Amish Toothbrush Rug!!!  I was so excited to finish it.  The shape isn't quite perfect, but it was my first one. It ended up being 37" by 33" in size. I need to take a picture of this on the wood flooring so it will pop more as the colors appear faded in this picture. I'm very happy with this rug. I crocheted a scalloped edging in the dark pink to finish it off, which is hard to see in the photo. It would be a great rug for a baby's room or little girl's room. I'd hoped to have enough fabric to do a second one but nearly ran out of some of the colors while doing it.
at September 21, 2015