Crafting, Reading and such.... 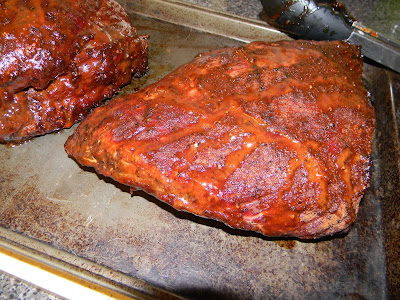 I started this rug about a month ago and haven't been able to finish it yet. I like the way it looks and lays. The plan is to get this finished this weekend. I used 4 sheets I picked up from the thrift stores. I really like the way they coordinate together. The dark pink definitely makes the rug pop as you can see from the top picture where I hadn't gotten to the next round of color yet and the second picture where I just added another row of the dark pink. If this finishes as nicely as I hope, it will be going up on my Etsy store. I may have enough fabric left over for a second one. It would be a perfect rug for a glamper or a little girl's room. I'm so excited, I finally have my business cards now. 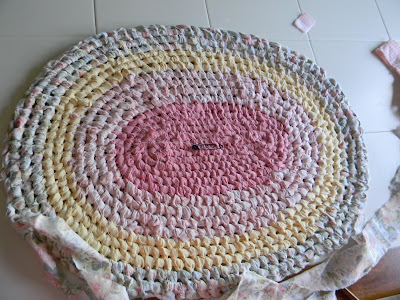 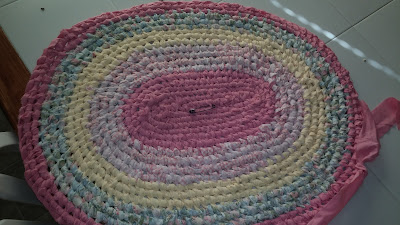 While looking at the Jamestown Garage Sale page a couple weeks ago I noticed a hardwood desk listed for $25 that I was interested in as a possible sewing table. A couple days later they listed it for free so I had Matt go with me to pick it up. It's not in bad shape but old and it had some deep gouges on the top so I'm working on sanding it down now and I plan on staining it an antique walnut. The picture below is after the first sanding but you can see how deep some of the scratches and gouges go. Matt suggested I use an electric sander so I need to pick up some sandpaper for it this weekend and hopefully get this project done. 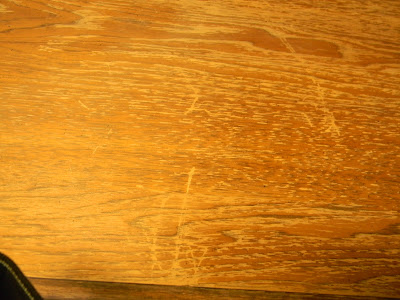 The Refuge by Sue Henry
This is a series of mysteries I've been reading by this author. This particular series is about an elderly widow who buys a motor home and goes on adventures with her dachshund, Stretch, which always seem to end up with a murder. The Refuge is actually the third book in the series and I've also read the two before this one. I really enjoy these. This book takes place in Hawaii and she had to leave her beloved dog behind to help someone from her town in Alaska where she resides when not adventuring.

Made From Scratch by Jenna Woginrich
I've read several of her books and this one had been on my want list for a while when I spotted it at Tractor Supply for $6 in the clearance section when picking up some cat food. It's a nice light read with some interesting ideas. Some I can't use like having chickens or rabbits right now. Some I can incorporate like learning to play another instrument or buying oil lamps and using them instead of electricity. Jenna went from corporate cube as a graphics designer to now running a farm. She has an interesting story.

The Plain Choice by Sherry Gore
Sherry Gore is an Amish Mennonite woman who writes Amish stories/romances. I've followed her for several years and my heart broke for her as her daughter grew sicker and died about six months ago. How she managed to finish writing this autobiography during that time is nothing but amazing. Sherry's story is unique, she didn't grow up Amish and she didn't live by the Amish. She grew up in California. Life wasn't easy for her. Her parents divorced, she ended up homeless, and then ended up married to an abusive husband. Her path to becoming Amish is very interesting to say the least.

His Baby Bond by Lee Tobin Mcclain
This was actually a Kindle freebee and was actually quite good. It centers around a rich brother who makes a sudden decision to come back and raise his brother's baby daughter after his brother and his wife die in an accident. The first problem he faces is that his sister-in-law's sister has been caring for the baby and has no desire to give the baby up. The second problem is that in their will the parents leave custody to both of them.

Hinduism Made Easy: Hindu Religion, Philosophy and Concepts by Shalu Sharma
My reading on Buddhism and watching a lot of Bollywood movies recently made me interested in Hinduism and what the difference between Buddhism and Hinduism was so I decided to do some reading on it also. Interestingly enough, they both developed from the same sacred books but then took different paths based on what they thought were the important books after that. The big different is that Buddhism consider themselves God's in training (of sorts) but Hindu's believe that there's a Supreme Being. It's pretty interesting if you like learning about different religions.
at September 04, 2015