I can't believe I have been so busy that my last post was about Mother's Day weekend.  Many things are going on here in our home.  Most important of which is that my youngest son Jordon has moved in with us. He was ready for a life change and couldn't find another job in Michigan so he decided to come out here and see if he can get work here.  I'm sure he'll have something soon since everybody is hiring.  He arrived Tuesday afternoon after a 24 hour bus ride which he says he'll never do again.  Apparently having some guy he didn't know sleeping on him for 8 hours was a bit disconcerting and the roads are in such bad repair everywhere that it was impossible to sleep.  He has recovered nicely though.

To celebrate his arrival we took him to the shooting range Saturday and shot for most of the day.  Both him and I got burned and I ended up with a little sun poisoning even with sunscreen on.  With the crazy weather we've been having I haven't been able to get out in the sun much and I paid the price this weekend.  Jordon went running the day after he got here, only about 2 miles, and just that short amount of time outside he was sunburned. Matt also got the four wheeler working today so they were able to play on that a little bit this afternoon. I imagine they'll be out in the next weekend or so playing on that and Matt's dirt bike.

Matt is getting itching feet and wants to do some traveling so we have a trip to Italy planned for fall 2015!!!  I'm so excited!  Matt has been there with a group of friends but would like to take me there to see it.  I'm reading books on Italy.  We're still looking for a good package deal and have decided a guided tour would be best.  I started a savings account to start saving for the trip.  I'm thinking November might be good as it will be our 7 year anniversary of our first date, makes it romantic.

We've been doing a lot of yard saleing and finding some neat things.  This weekend we thought we'd have some luck considering how many sales there were but really found almost nothing.  We did find a glass gallon jug that we bought for 25c to put mead in when we get ready to rack it.  Last weekend I found a Kindle for $50 at the pawn shop in town.  I use the Amazon Kindle App on my tablet but they won't let you borrow books unless you have a Kindle of some type.  With Amazon Prime you can borrow one book a month to read and then return it at no cost.  Not all books can be borrowed but there are a lot I would like to read but doubt I want to buy so it's a great deal since I have Amazon Prime anyway. The one advantage to the Kindle is it has Whispernet which allows you to download a book anywhere.  I need WIFI access to download with my tablet so it can limit but typically isn't an issue. 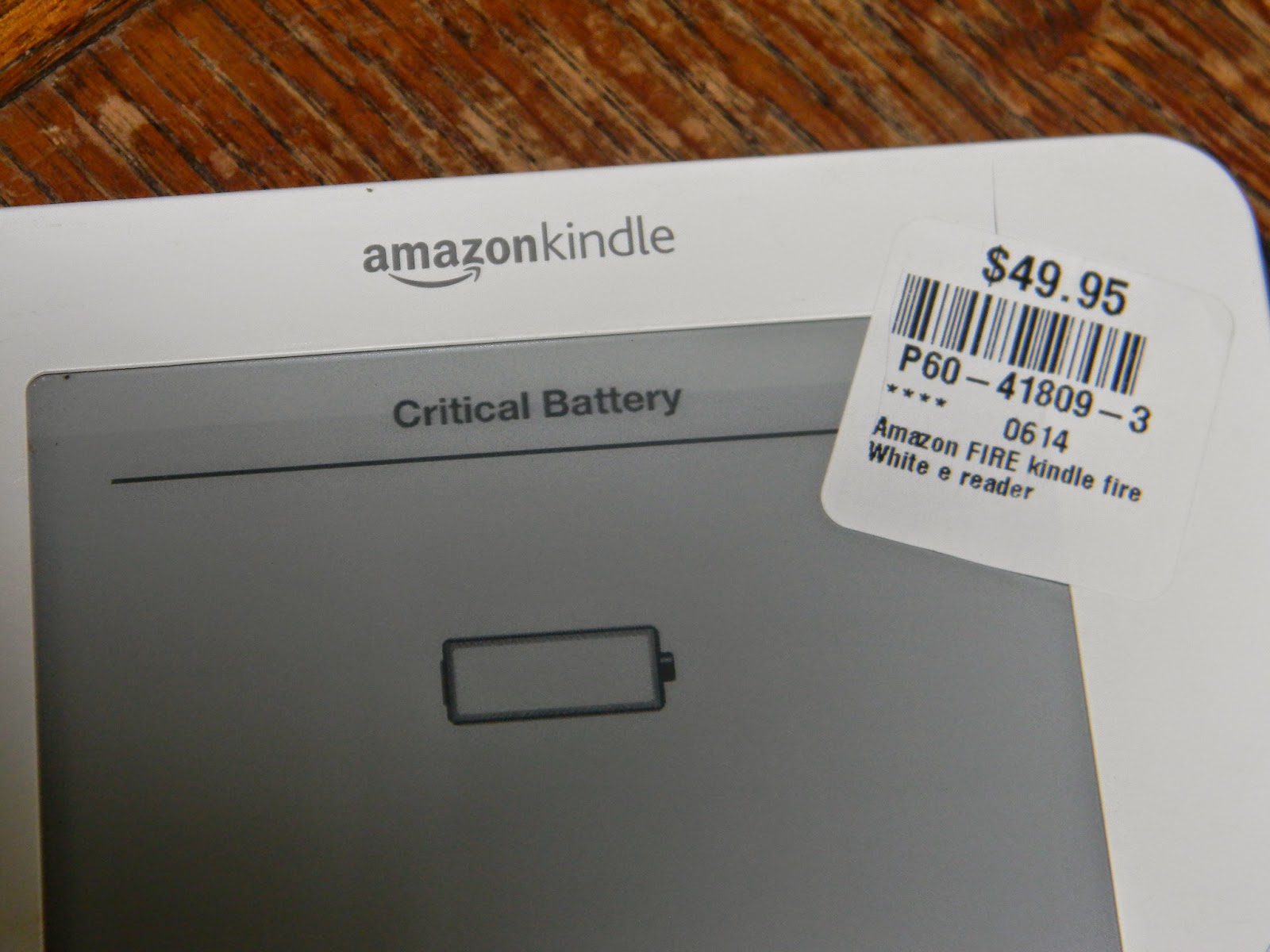 I got a small bonus from work so I decided to use it to buy a twining rug loom.  Actually I bought the deluxe package which has the rug size frame and a placemat size frame and then you can combine the sides from the rug frame with the tops of the placemat frame to get a table runner frame.  I quickly realized that I was going to need an easel to keep from having a lot of back pain after working on it so I bought a cheap $20 artist easel at Walmart and Matt added a board to it to support the frame and I have a working easel.  Here's a picture of the rug I'm working on.  I've gotten double this amount done.  Unfortunately we've been so busy I haven't had much time to work on it. 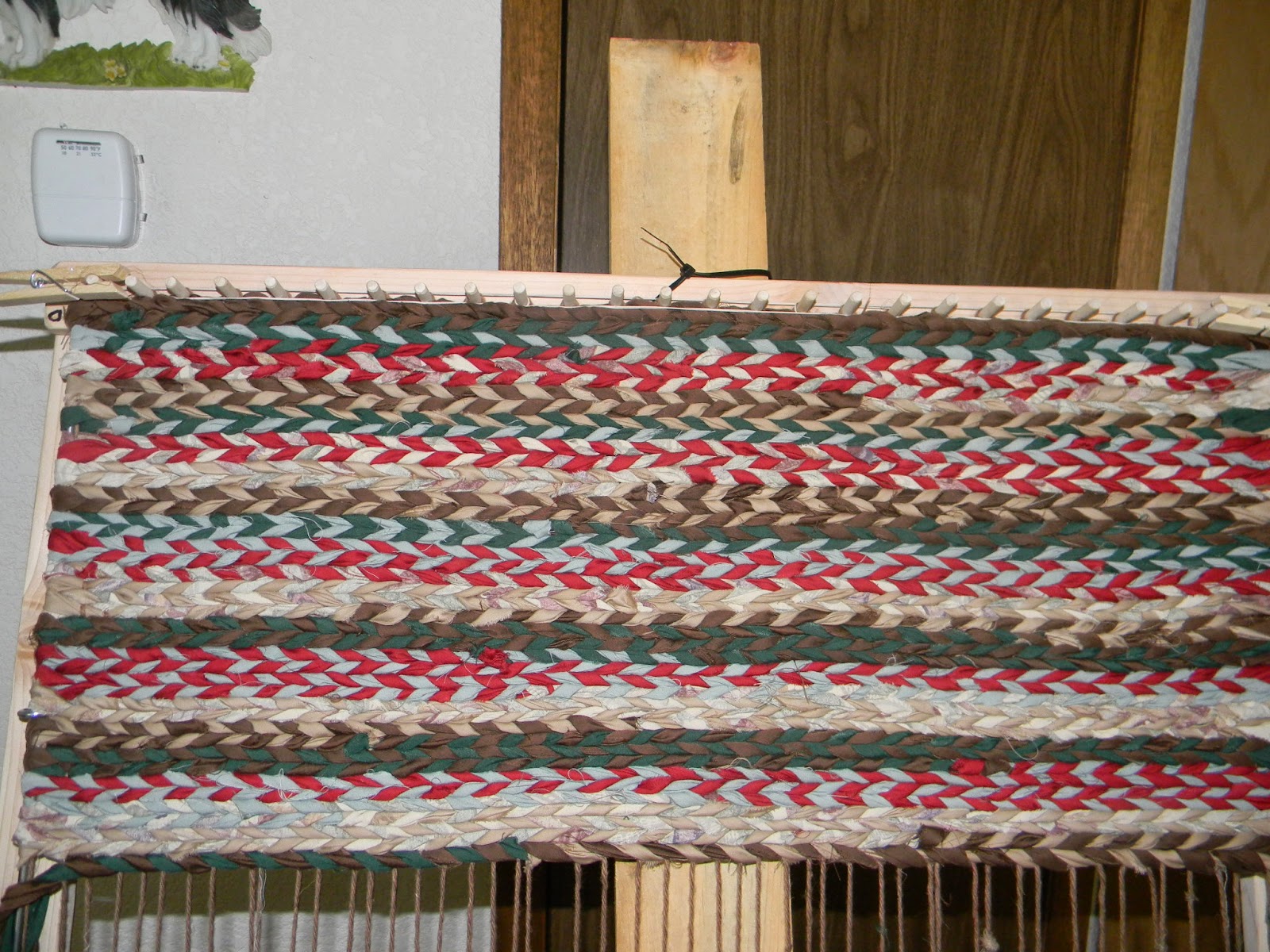 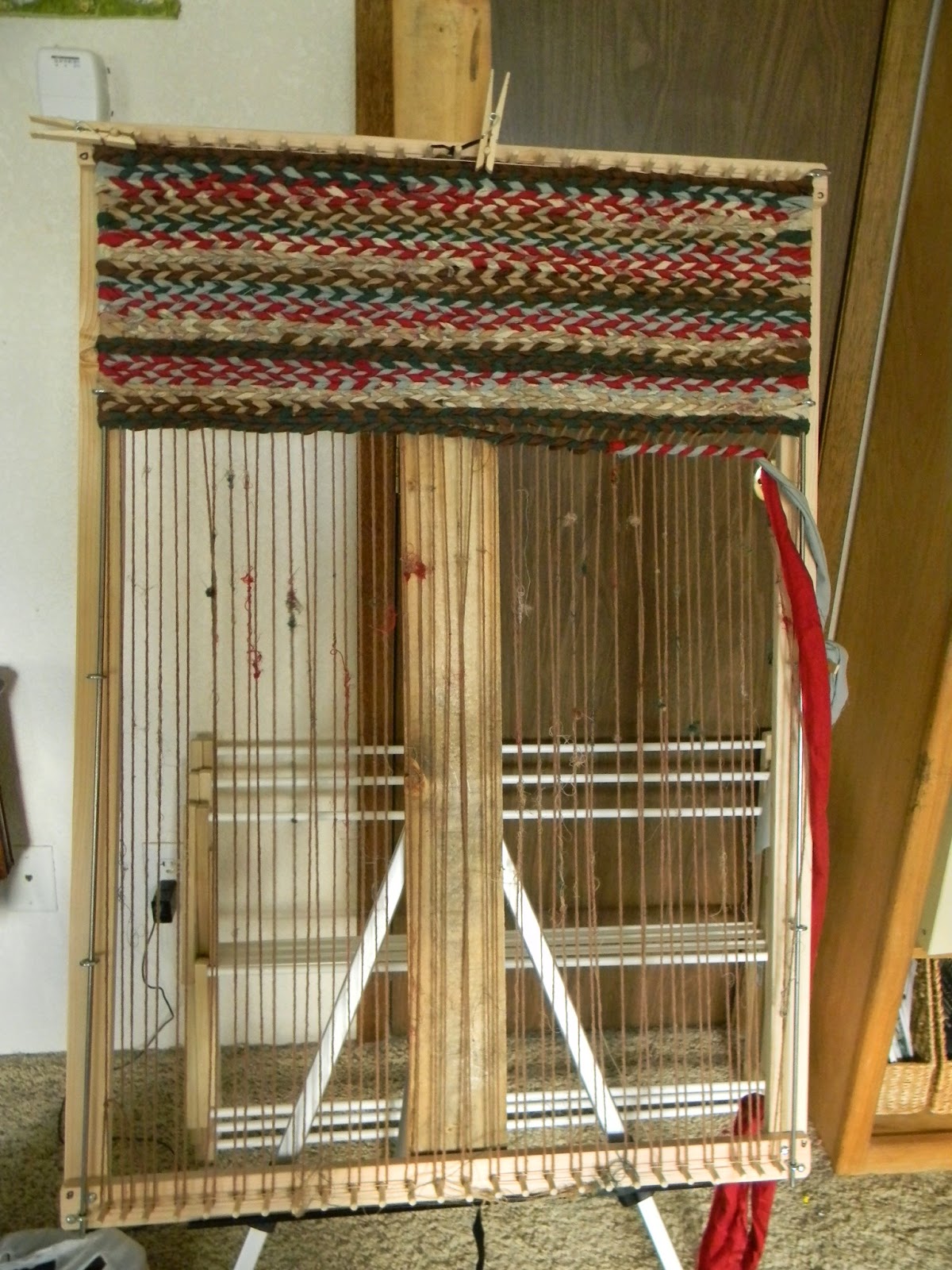