I had a nice three day weekend. Matt had his six month checkup Friday so I took the day off and we headed to Fargo.  His appointment lasted all of maybe five minutes. His grafts are growing well and they're happy with his progress. Next appointment will be in six months for his one year. After his appointment we headed out for an afternoon of shopping and eating.

First stop was at Prairie Yarns. I've been wanting to check out the yarn stores in Fargo but it never seems to work out. I really wanted to buy some sock yarn so I have my next knitting projects lined up. Matt was a little shocked at how much sock yarn costs. I think he appreciates the socks I've made him a little bit more. He decided he didn't need another pair right now so I bought myself two different yarns. The staff were really nice and helpful. I really appreciated them offering to ball my yarn for me for free. Matt appreciated it even more that he didn't have to help me ball it. It's a really nice courtesy service to offer. I asked about spinning classes but she doesn't have an instructor right now but she did have some roving that I checked out. I'll be watching and hoping she finds an instructor. The picture below doesn't do justice to the yarn on the right, I couldn't get the lighting to reflect all the variegation in it. I also found these adorable puppy stitch markers.  They sort of look like a border collie so I had to have them. 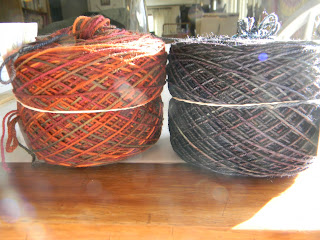 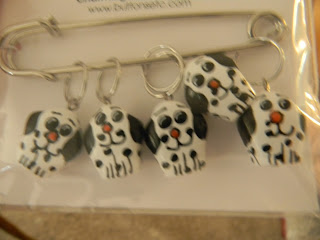 We were definitely hungry after the yarn store stop so we decided to eat lunch.  We've been wanting to check out the Middle Eastern restaurants in Fargo so we chose to try Aladdin's Cafe and it was an absolutely delicious meal. We both chose to have the combination platter. Matt chose the Kufta Kabob and Gyro meat with rice and I chose the Kufta Kabob and Chicken Kabob with hummus. The meats were so tender and well seasoned. We could have sat there all day and feasted. We will definitely be going back. We ended our meal properly with some baklava and fig bars to bring home. I wish I'd thought to take pictures of the food. The only thing we didn't like was that the food was served on foam disposable plates and they had plastic utensils.

Next stop was the mall. I needed a new pair of shoes to wear to work. I love my crocs and clogs but with the amount of snow we get here I really needed something with a higher back to keep snow out of my shoes. I had a great guy helping me and I was able to find a pair. Matt said the guy had a foot fetish. Unfortunately they didn't have the Dansko style I wanted in brown so he ordered it to be delivered to the house at no extra cost. I doubt many stores do that anymore. I've wanted to try Dansko shoes for a while but they have European sizes so I needed to try some on to find out what size I would be. He also recommended a new slipper by Vionic they just started carrying that has a nice orthopedic arch support. I have a really high arch so the chiropractor has now had me start wearing an insert to help support the arch. These slippers are perfect and the arch support is high so I won't have to wear an insert in them. They will be great for wearing at the house.
We wasted some time after that at Target and then Coldstone before heading to a destination we've been wanting to checkout since I found it online, Prairie Rose Meadery. We both got a flight of four meads to try. Both of us chose cherry and ginger. Matt chose star anise and mint and I chose blackberry and traditional to round out our flights. My favorite was the traditional. Matt liked the unique taste of the star anise. If you're in the Fargo area, definitely check out this meadery. The staff were very nice and helpful. We really enjoyed talking to them while we sampled the meads. We ended up purchasing a bottle of the traditional to bring home. Again, I forgot to take pictures. The Meadery was larger than I expected it would be. It's located in a business district but wasn't hard to find. They have a bar area, table area and some couches so you can pick how you'd like to relax while sipping some mead. We enjoyed checking over the mead making area through the glass from the bar. The meads were very smooth. She'd actually been to B. Necktar which was one of our favorite hangouts in Michigan. They do have a cheese and cracker board to help clear the palate or snack on but it was a bit steep in  my opinion at over $13 or for a couple dollars more you could add salami to the board. I didn't ask what types of cheeses they had as we were still full from lunch.
at October 08, 2015