I-Tail-ian meatballs were made and given 3 paws approval from the pups.  I used a 1" cookie scoop to make them. I think they are too large for snacks so I cut them into quarters after I baked them.  The recipe had them cooked in a pan the entire time but I thought it would be better to bake them so I put them in the oven for 20 minutes after browning them in a pan.  I did keep out 3 whole cooked meatballs and frozen them for the pups Christmas meal.  The recipe I believe is intended for those that cook their dogs food daily and if you used these for a meal I would probably use a larger scoop or feed them several depending on the dog's size. I also found these to be extremely moist.  The next time I might use only one egg to bind them and see if that helps.  As you can see they sort of flattened into patties when I flipped them.

My baking today also included 4 mini loaves of banana bread.  I used a new recipe that I found on Not Quite Amish Living.  The pups got a bit of a loaf end and gave it 3 paws up too.  Oreo loves bananas so it's no surprise she likes banana bread and Tip loves bread of any type.  I added pecan chips to it, although not the cup they suggested.  I used a small bag so it was probably approximately 1/4 cup of chopped pecans if that much.  I think I bought the pecans for salads and hadn't used them so it was a good way to use them up.

While I was baking, I cleaned the shelves and drawers of the fridge.  I had some fruit go bad in the fruit drawer and wanted to sanitize the drawer and ended up cleaning the whole thing. It's a good thing to clean it out every couple months anyway so it was due. I'd like to get some drawer and shelf liners to make future cleaning easier. Unfortunately I didn't get the freezer inventoried like I'd hoped. At this point I honestly have no clue what's in there.  With Matt on a soft diet for the past several weeks we haven't been eating out of the freezer.

I was hoping Jordon would help me decorate the tree but he took off after I picked him up from work. Matt was working tonight. This year I chose to put it in the living room.  To protect the carpet from the needles I put a flannel bed sheet under it to catch the needles. I put the tree skirt over the top of the sheet in the front.  I decided to go simple this year on decorating and left 75% of my decorations in the tubs.  The tree looks a lot prettier in life then it does in this picture.  I had to take down and put away all the fall decorations and then reorganize the living a bit to clear that corner. Hopefully Matt doesn't get too upset.  He hates me reorganizing rooms. 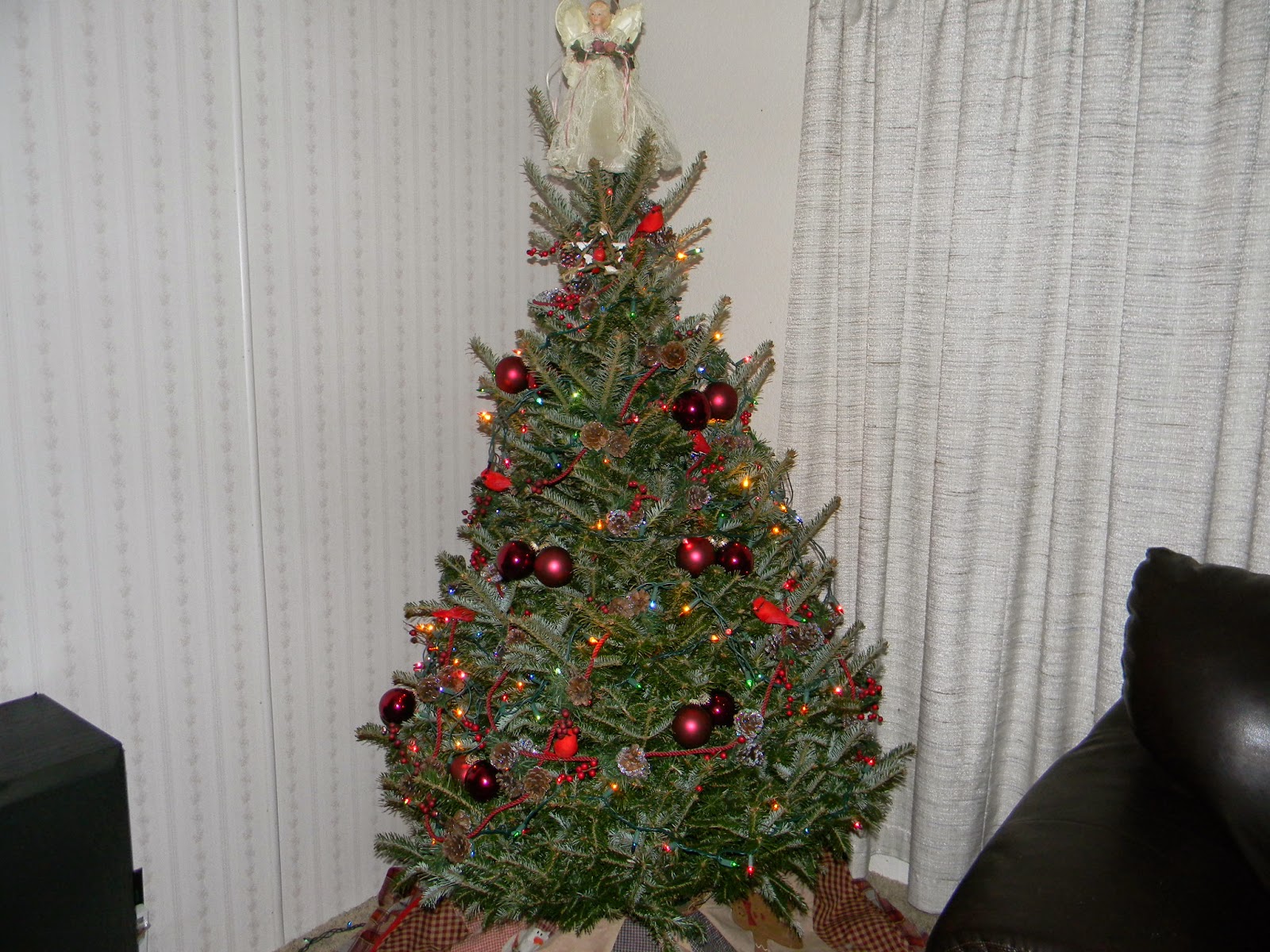 While I was working I  watching Cranford on Amazon Prime.  I really like this BBC series and was disappointed to discover it only has 8 episodes total.  I finished season 1 today and unfortunately season 2 isn't free.  There's 3 episodes left of the series so I'll probably break down and pay for season 2. I may check the library to see if they have it before spending the money.  My other recent favorite was Miss Fisher's Murder Mysteries on Amazon Prime.  I finished up with the series last weekend.  Matt and I referred to as the "flapper mysteries".  I wanted to watch some Miss Marple mysteries but discovered the one I wanted is now no longer free.  Why is it everything I like has gone from free to rent for a fee?  After I finished watching Cranford I decided a Harry Potter marathon was my choice for relaxing so I popped a DVD in.