It was a beautiful weekend with temps in the 30's.  It feels absolutely balmy! The snow is melting and everything just looks dirty.  I prefer the look of pristine snow after a fresh snowfall.  I'd planned on taking the dogs out for a walk but Saturday morning I woke up with my plantar fasciitis starting to flare in my left foot and by Sunday it was full blown.  I was not happy to say the least at not being able to go out and enjoy the weather.

Our weekend started out a bit different then we anticipated.  We were kicked back watching TV after supper when the texts started.  After several texts and phone calls Matt ended up having to go help his buddy out.  The guy had tried to save a few bucks on his dish installation.  When he went to drill a hole he hit something (big blue flash) and then half his house was without electricity.  It was something of a drama trying to find somebody that had the gauge wire he needed for repairs and to find an electrician.  Good news is he has electricity again!  While Matt was out I decided to watch a chic flick movie and started watching the Downton Abbey season 1 while knitting on my sock.

Saturday was a sleep in day for a change.  Woke up about 5 and let the dogs out and fed everybody and went back to bed.  Unbelievably the crew let me sleep until 8!  Pretty boring stuff, basically just cleaning and laundry.  When I had kids around I swear I spent more time picking up their toys to be able to vacuum then I spent vacuuming.  Now I spend my time picking up dog bones and toys before I vacuum.  Am I the only one that has this problem? 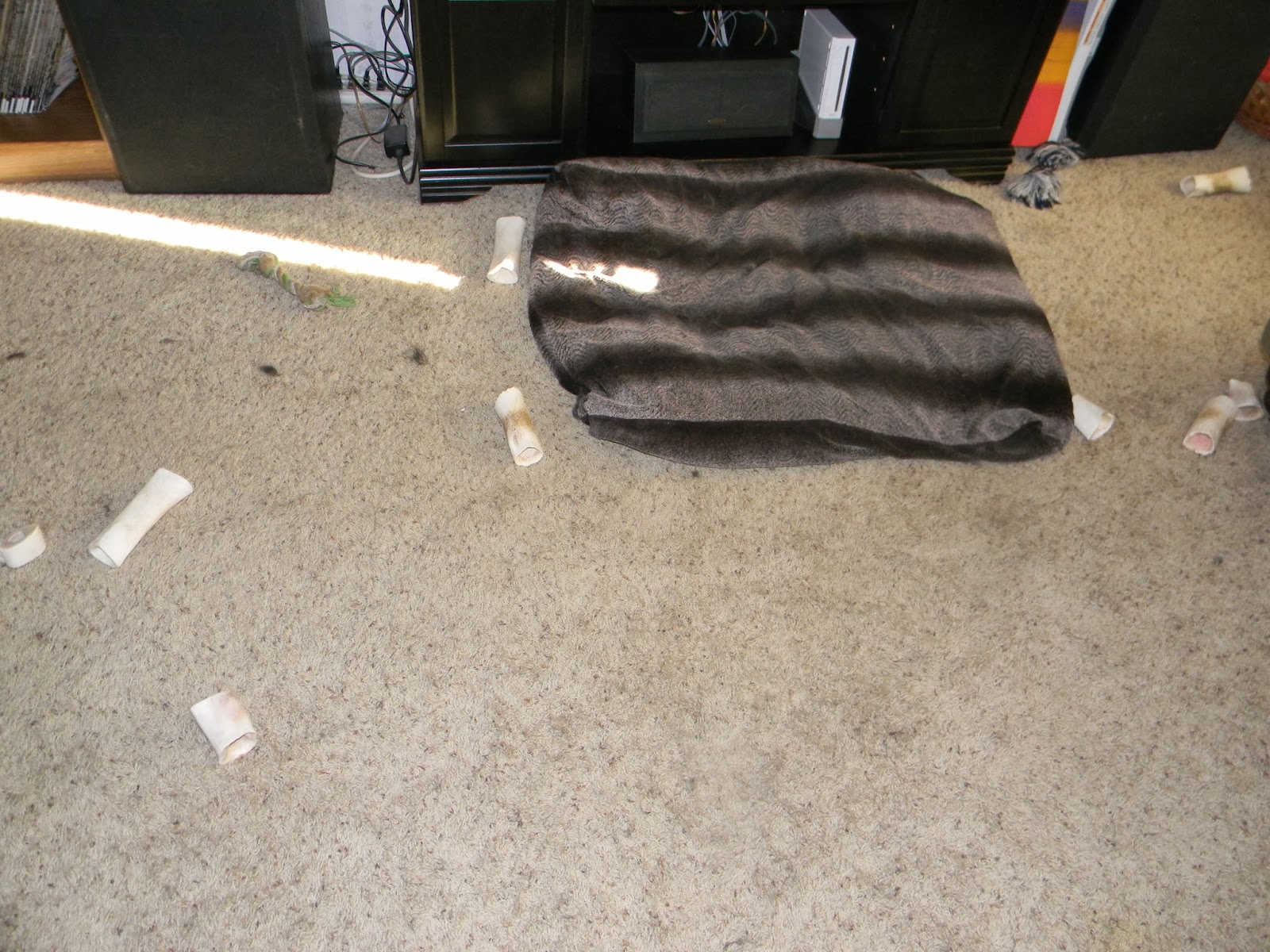 Matt spent the day cleaning out the drain in the spare bathroom shower, installing a new shower head, and putting a new toilet seat on.  As I said, boring stuff. 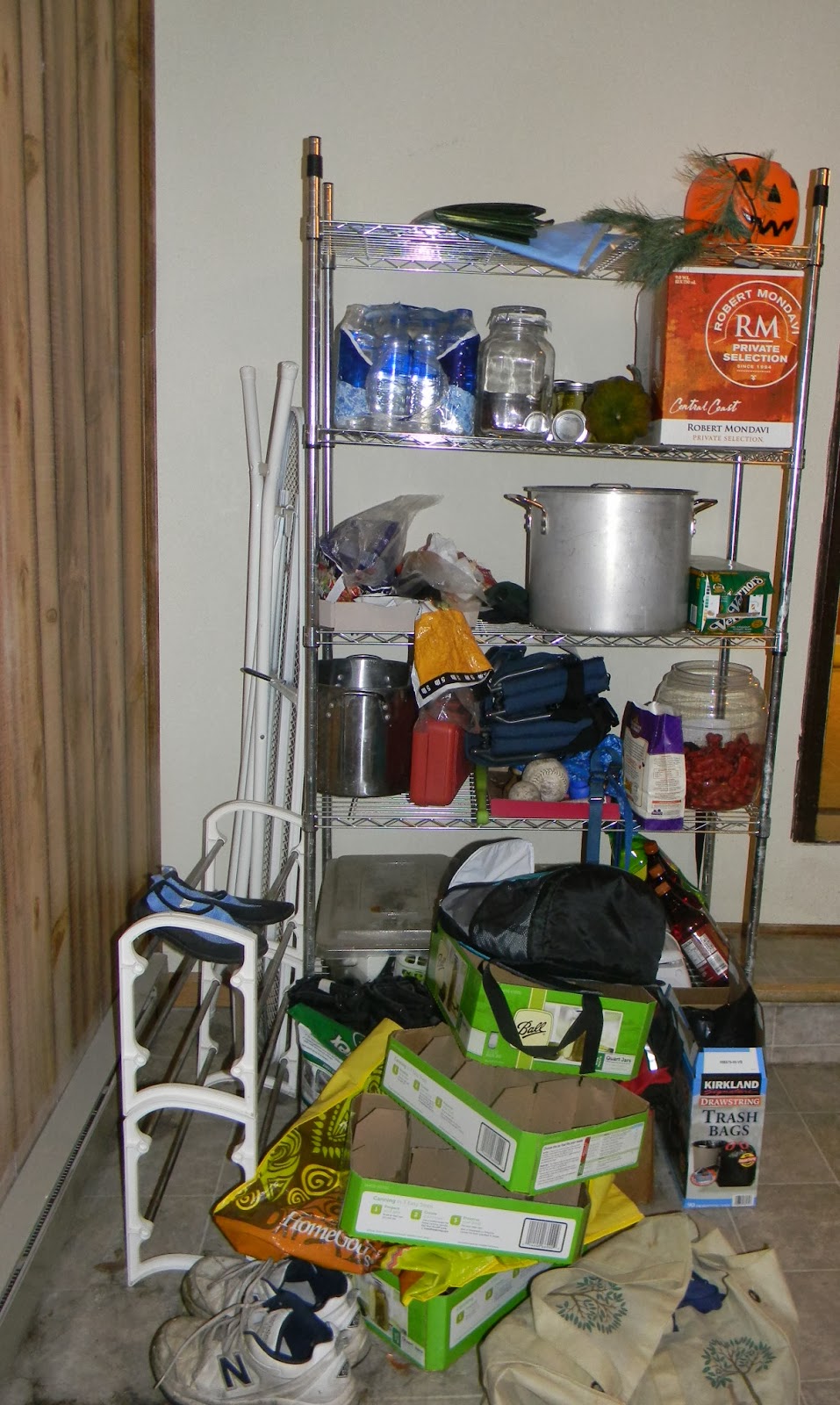 This is what my mudroom pantry area looked like this morning (Sunday).  Pretty messy to say the least.  I will say I'm not the sole reason this area is so messy as there were several things that were put in this area that didn't belong there.  This was my project while Matt was out ice fishing.  Unfortunately no fish were brought home. 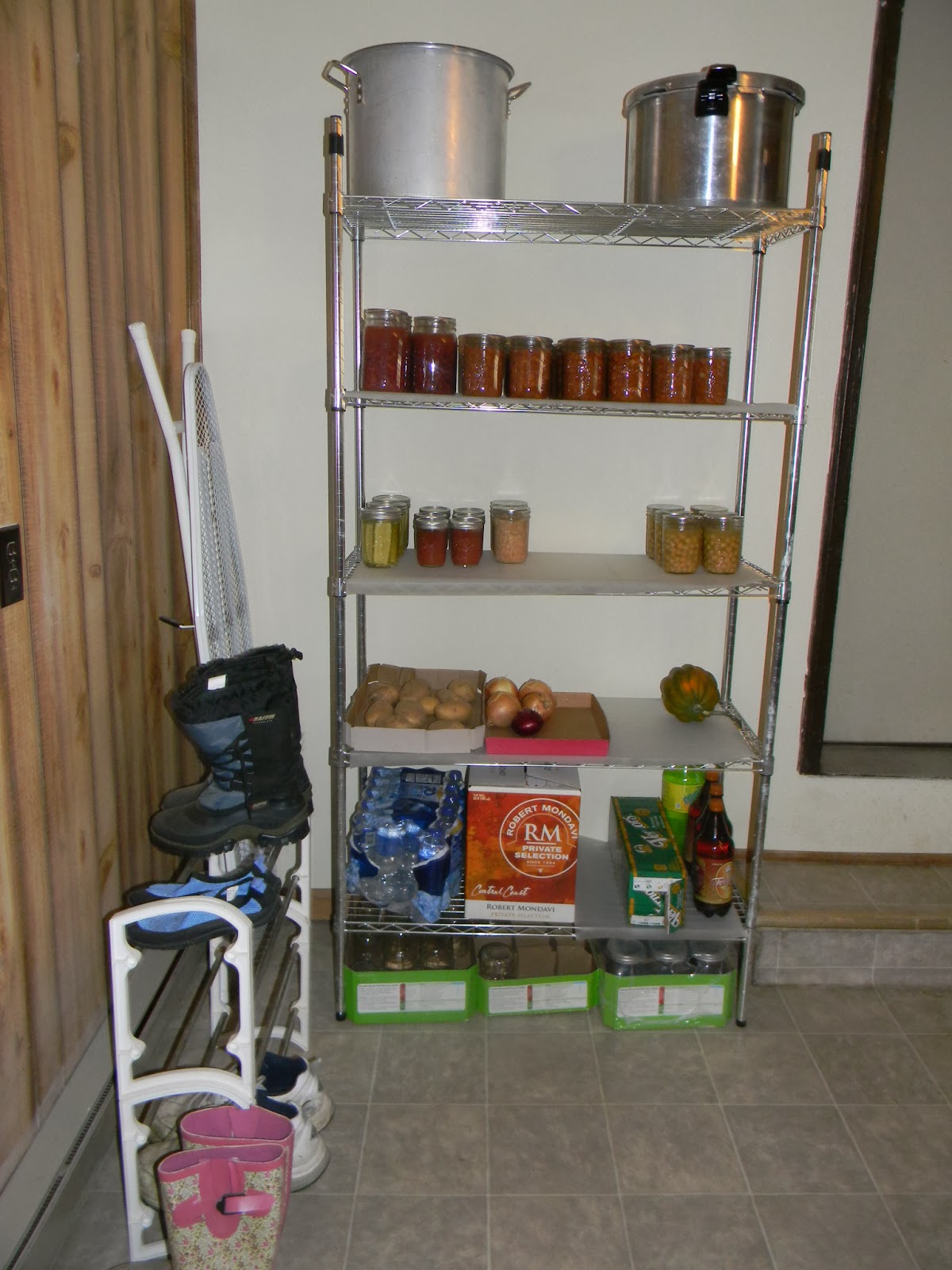 This is the same area with all my wonderful beans added.  I put all my empty jars in the boxes underneath the shelving.  Bottom shelf is drinks; water, case of wine, and pop.  Second shelf up has my potatoes, onions, and acorn squash on it.  Third shelf up has my dill pickles and salsa I canned in the fall along with the chickpeas that I canned last weekend.  I may move the cans of applesauce I have left to this shelf too.  Fourth shelf up has my kidney beans, pinto bean mix, and Great Northern beans.  Top shelf has my pressure canner and one of my large pots for canning.

Before putting everything on the shelves I bought rolls of plastic Contact shelf liners and cut them to the length of the shelves.  Basically a roll did one shelf with a bit left over.  I decided on the plastic since it was 1) thin and 2) easy to clean.  Matt wanted to put plywood on the shelves I didn't want that thickness added and if any of the jars broke for any reason we'd probably have to pitch the plywood and get new since it would damage the wood. 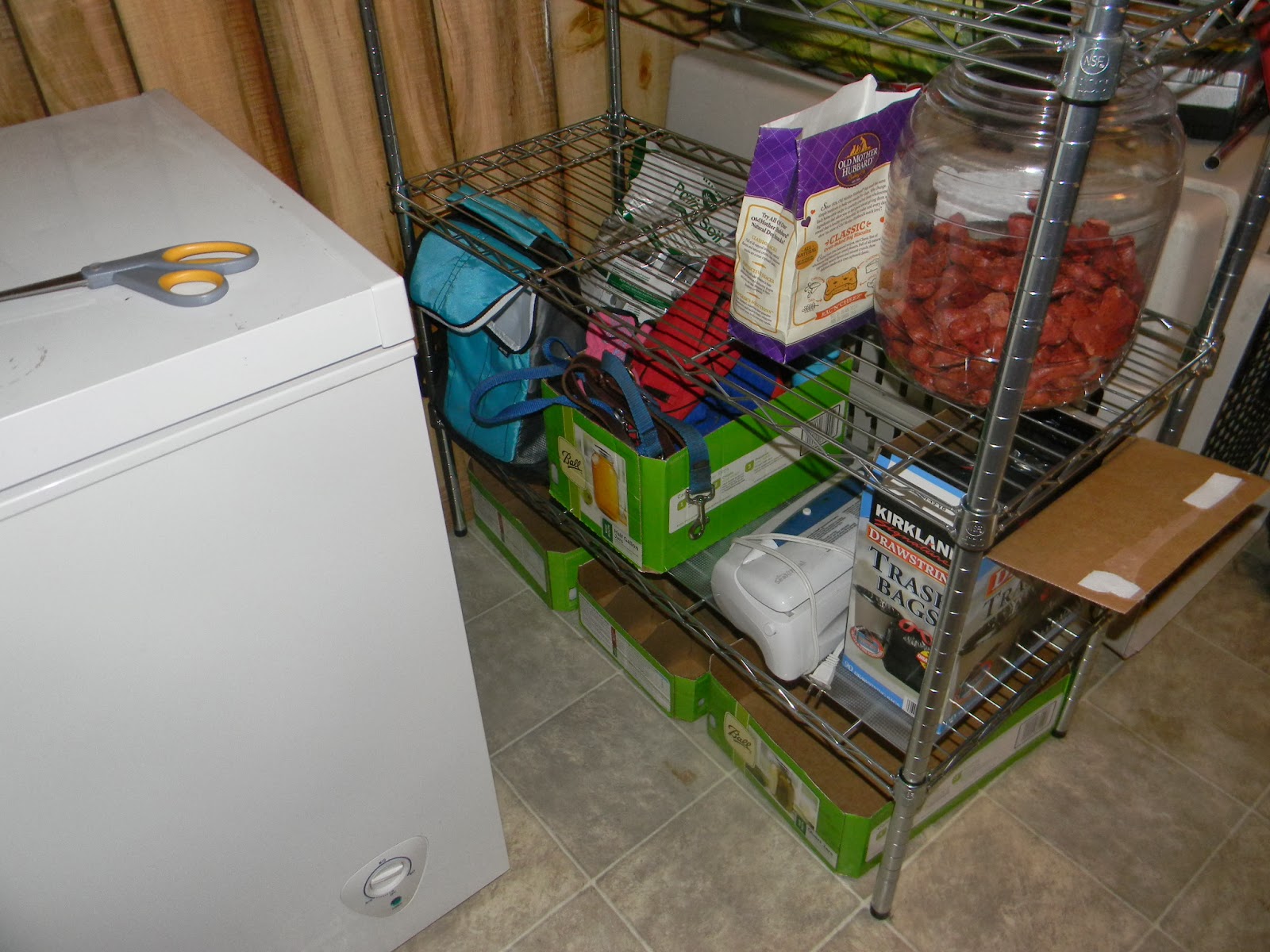 Matt gifted me with a second set of shelves.  For now it's stuck in length-wise by the freezer.  I'm not liking this arrangements so this will most likely be moved once I figure out how to move things around in that room.  I plan on canning some ham & bean soup and vegetable soup so the shelves on this unit will hold those and any other items I decide to can. 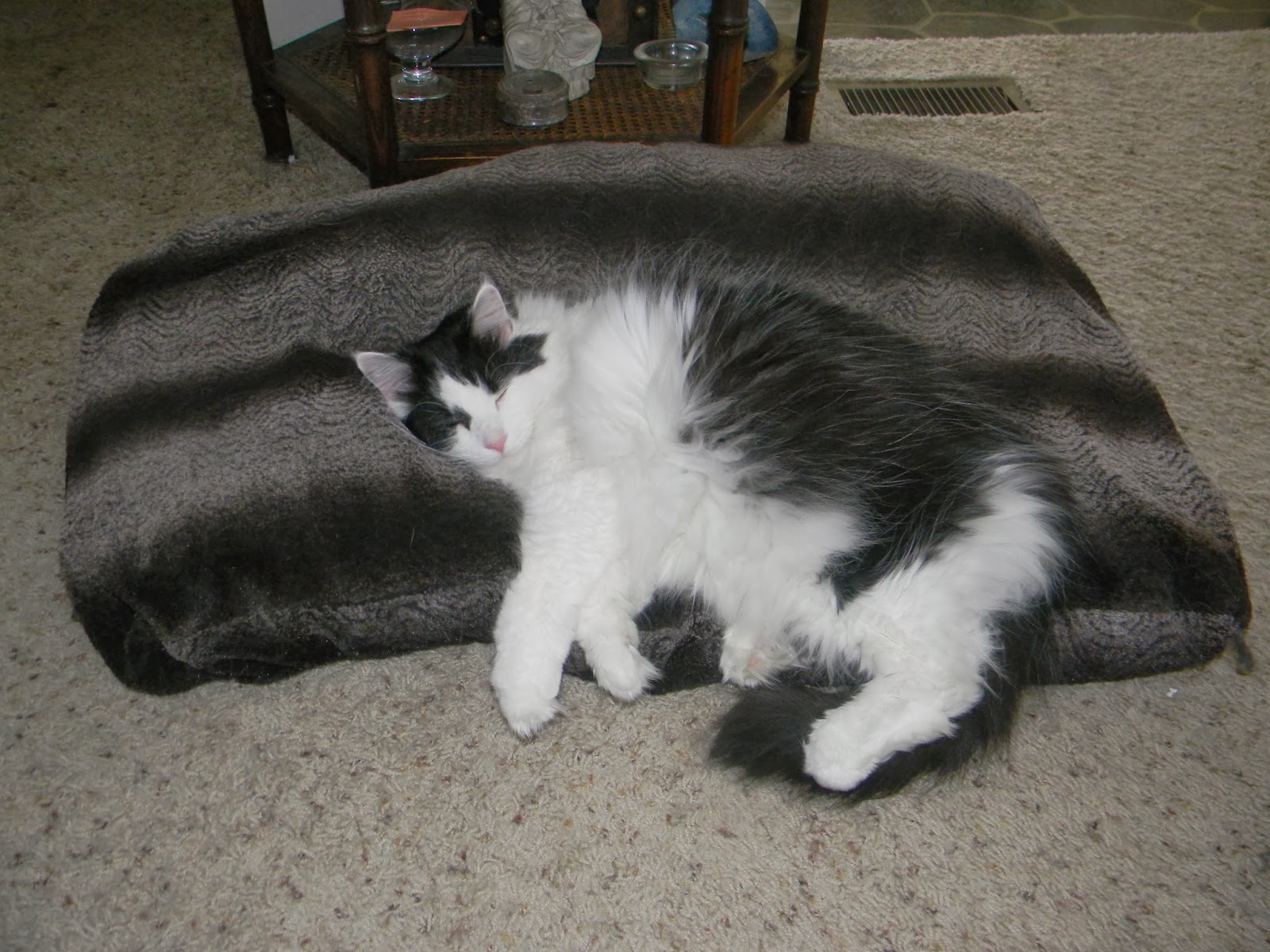 Apparently all the work I did wore Moo out.  Doesn't she look exhausted laying there!
at January 12, 2014