Happy New Years!  I hope everybody has an awesome and blessed year.  2013 was a wild year for us to say the least.  Hopefully the blessings we've had follow us into the New Year and continue to grow and expand for us.  I have high hopes for this coming year!

After being sick for the past 2 weeks I'm finally starting to feel a smidge better.  It's just not fair to be sick for not just 1 but 2 holidays!  I've got a cough that is typically not too bad in the morning, but gets progressively worse through the day and just drains me.  I've started applying eucalyptus oil at night, which might be why it's lighter in the morning.

We barely made it to see the New Year last night.  Matt fell asleep in his chair about 10 and woke up just before midnight so he could open the champagne.  After we drank our champagne it was off to bed for us. I know we're dull.  I did offer to take Matt out for supper if he wanted but he decided he'd rather stay in so I went ahead with the taco salad I had on the menu.  When I made the menu up for the week I'd forgotten it was New Year's.

The pups actually let us sleep in until nearly 8 this morning! Considering it was -22 out, I can't blame them for not wanting to venture out.  When I opened the door to let them out it was lightly snowing. I was surprised as cold as it was.  We've gotten maybe an inch over the past 2 days.  Matt was happy because a lot of our snow had melted a couple days ago when we had a heatwave of 36' and he's been wanting to take the snowmobile out so any snow is a good news to him.

It just hasn't felt like Christmas this year for me so I decided to take down the tree today and put everything away.  It went pretty quickly too.  What a mess the needles made though.  Even though Matt made sure it was watered the needles dried out and they were as sharp as a sewing needle.  I don't think we'll go with this type of tree next year.  It was pretty though.  As you can see the cats pulled down the lights and branches on the bottom of the tree.  I'm glad we put the tree on the linoleum entry way in front of the door.  Trying to get all those needles up off the carpet would have been a nightmare.  I had a heaping dustpan full of needles. 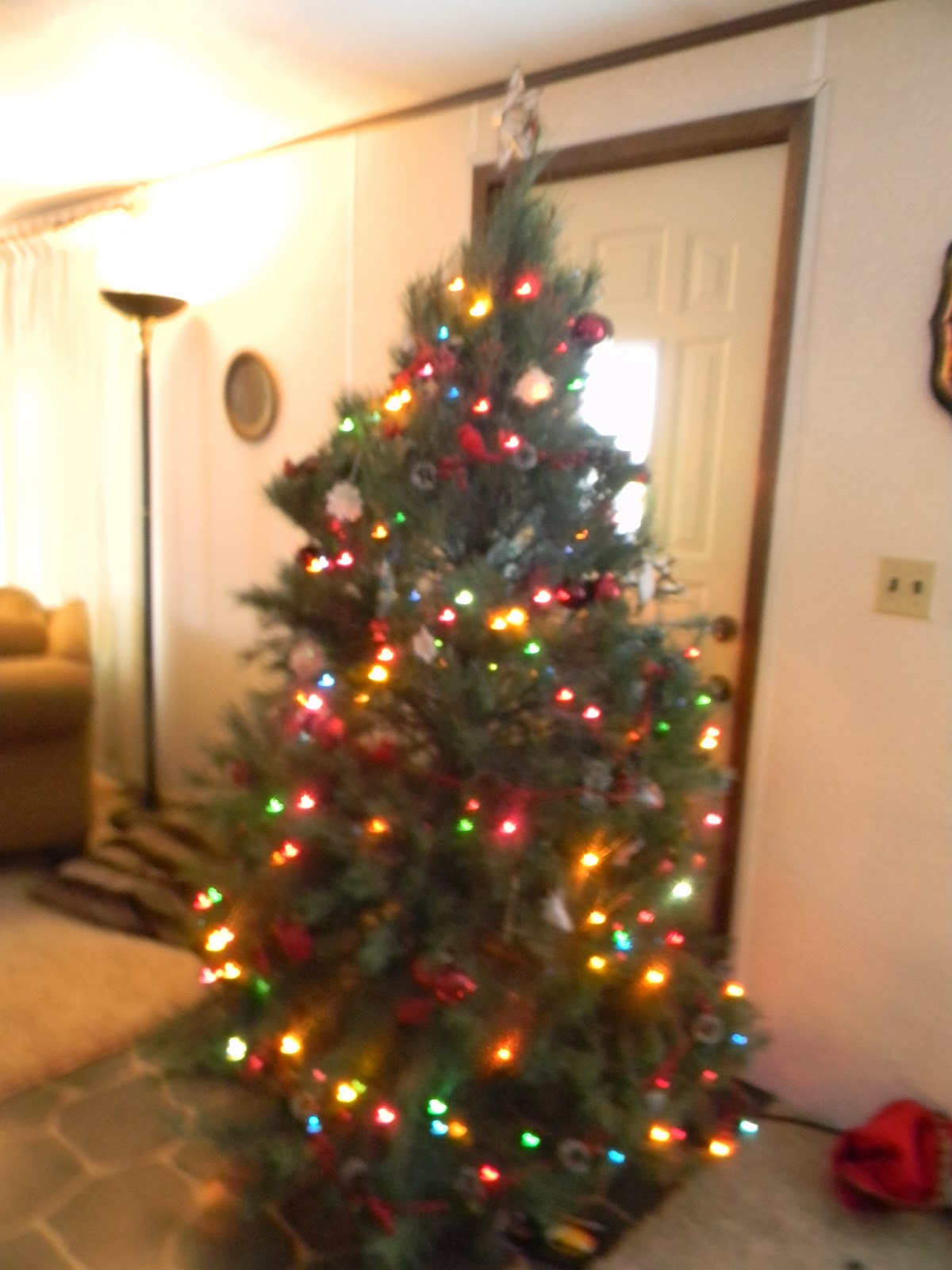 Otherwise our day was pretty laid back.  I finally got my new Garmin Nuvi that Matt got me for Christmas out and uploaded the updates to it so it's ready to go.  I also did a couple posts for the blog and caught up reading some blogs.  Matt offered to go out and pick something up for supper after I had several coughing attacks, which was sweet of him, but I wanted to have a nice meal for our first day of the New Year so I prepared meatloaf, green bean casserole, mashed potatoes, and gravy.  It was very filling and comforting.  I've read that you should start the New Year like you want it to progress and I feel cooking food ourselves instead of eating out so much, especially since we have such limited options, is very important.  We also were able to watch the Red Wings play today even if they did lose.  Our channels rarely have their games on so it's a special treat when we can watch them.  I washed the bedding and vacuumed all the rooms.  Boring, but it's what I needed. 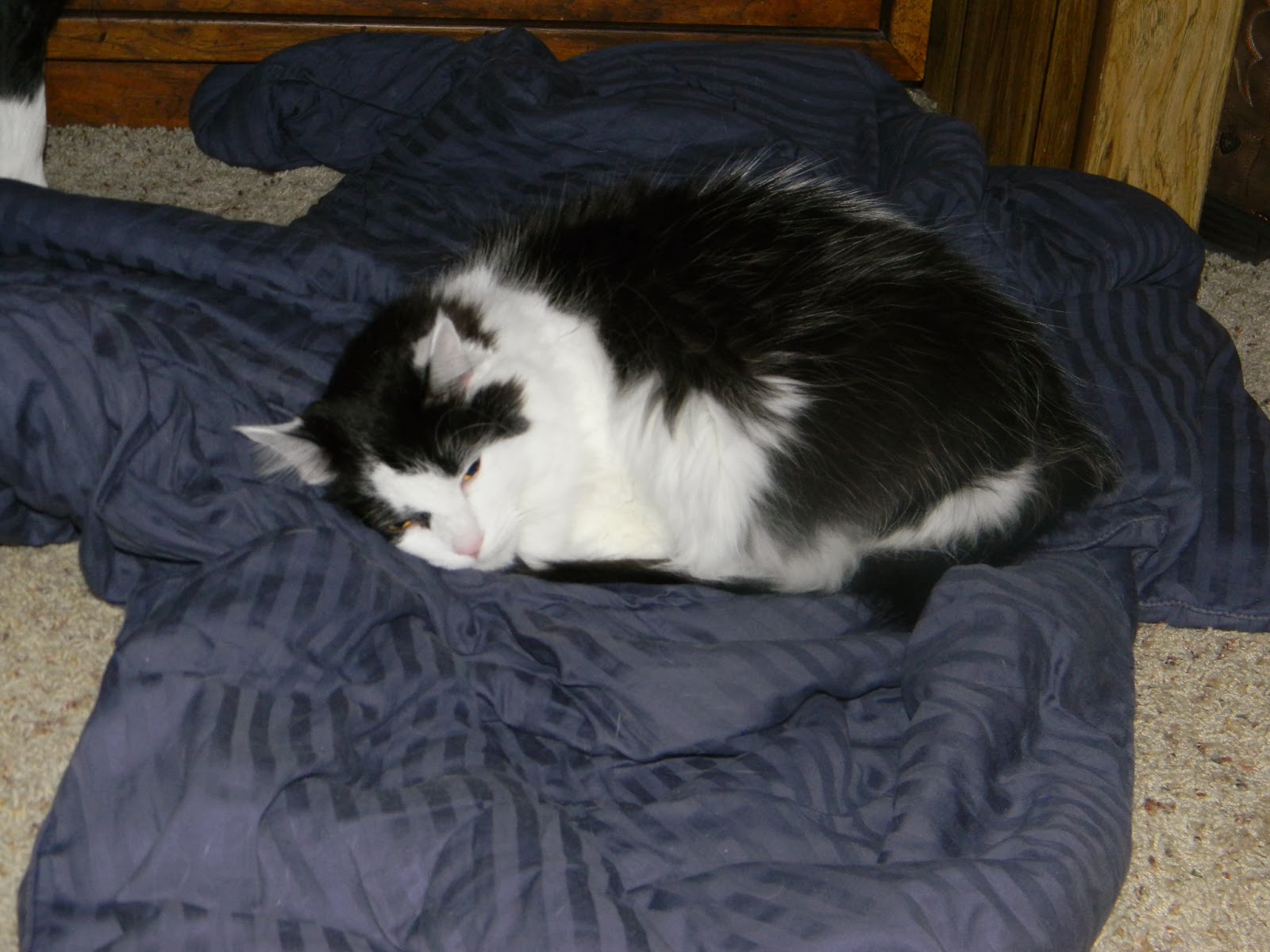 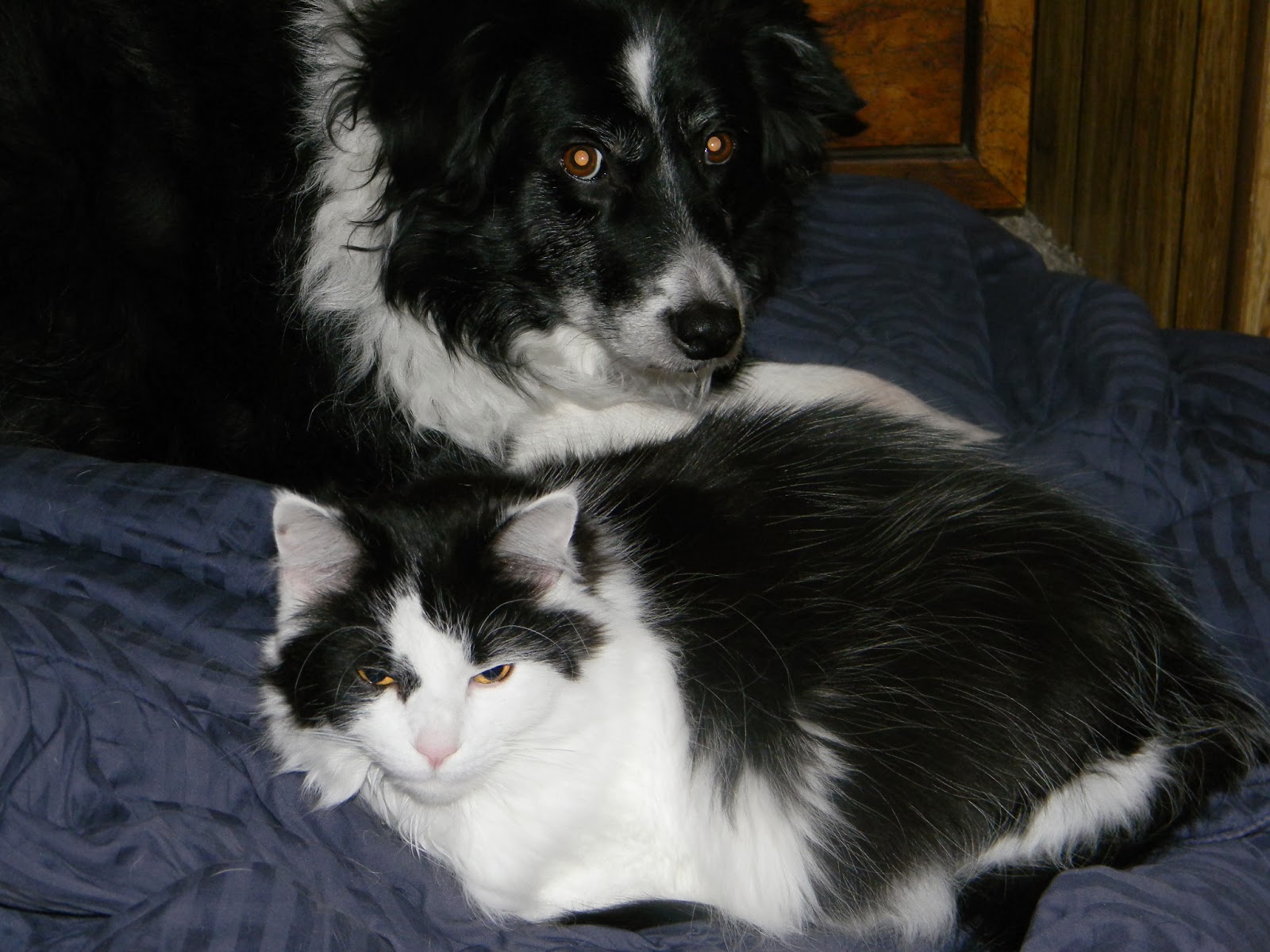 I walked into the bedroom to put away some laundry and found Moo trying to take over one of the dog blankets for a catnap.  Lacey decided to join her and you can see her glaring at me like it's my fault.
at January 01, 2014