Yesterday was Matt's and my five year anniversary of our first date.  Hard to believe it's been five years already.  So yesterday we went exploring and thrift storing, which are two of my favorite activities.  It was a beautiful sunny day although chilly with a temp of 9 and wind chill of -9.

I guess I can mention that dressing to go out here in North Dakota is different.  People are use to the cold temps and dress appropriately.  With temps in this range women don't dress in flimsy little tops to impress the guys, we dress in multiple layers for warmth.  Unfortunately most seem to think this means hooded sweatshirts nearly exclusively but for me it means beautiful sweaters.  To keep warm yesterday I wore a mock turtleneck under a hooded sweater with faux fur around the hood along with flannel lined jeans over which I wore my long down coat, which kept me warm and comfortable walking around town.

Even though we live only about 25 minutes away from Valley City, we haven't been there.  I'd heard they had a lot of neat little antique shops but hadn't heard much else about it so we decided to do some exploring.  They're also known as the City of Bridges.  Due to the chilly temps we didn't explore those but will wait until it's warmer out.  We'd heard from several people about Four Corner Pizza so we decided to stop there for lunch.  The thin crust pizza was awesome.  I'm not a fan of thin crust but I really liked their pizza, TONS of vegetables loaded on it, and the perfect amount of sauce. They slice the pizza in small squares which I liked but Matt would have preferred larger slices.

After fueling up we headed out to explore. Of course I then realized I had forgotten my camera and couldn't take pictures.  My phone has a decent camera but with the bright light yesterday it makes the screen impossible to see to take pictures.  The first thing that caught our attention, besides the jet displayed at the Veteran's Memorial Park across from the pizza joint, was the old buildings.  I love old buildings and especially the ones that were built with the original occupant's names on their fronts.

The antique shops were awesome.  I could have spent a fortune at one of them if I'd had a fortune to spend.  I have a feeling I'll be going back to pick up a couple things if she still has them.  There's a beautiful wood table at the one shop I'd love to get.  She also has 6 chairs with it (sold separately) that are pretty nice looking too.  I'd mentioned to Matt that I'd like to get a new tablet set this year and this one definitely grabbed my eye.

We explored several thrift shops and a quilt store.  The quilt store had a huge selection of fabrics so I know where I will be going for fabric now if I can't get to Fargo.  Matt was quite impressed with their kitchen items at the front of the store.  We picked up several finds at the thrift stores including this beautiful log cabin tea pot ($5) and set of nutcracker salt & pepper shakers ($3) to add to my collections.  Matt picked up several books to read, so he should be set through at least the end of the year.  For my present to him I bought him a bookcase for his office/man cave to put his books in so now he needs to work on filling it up. 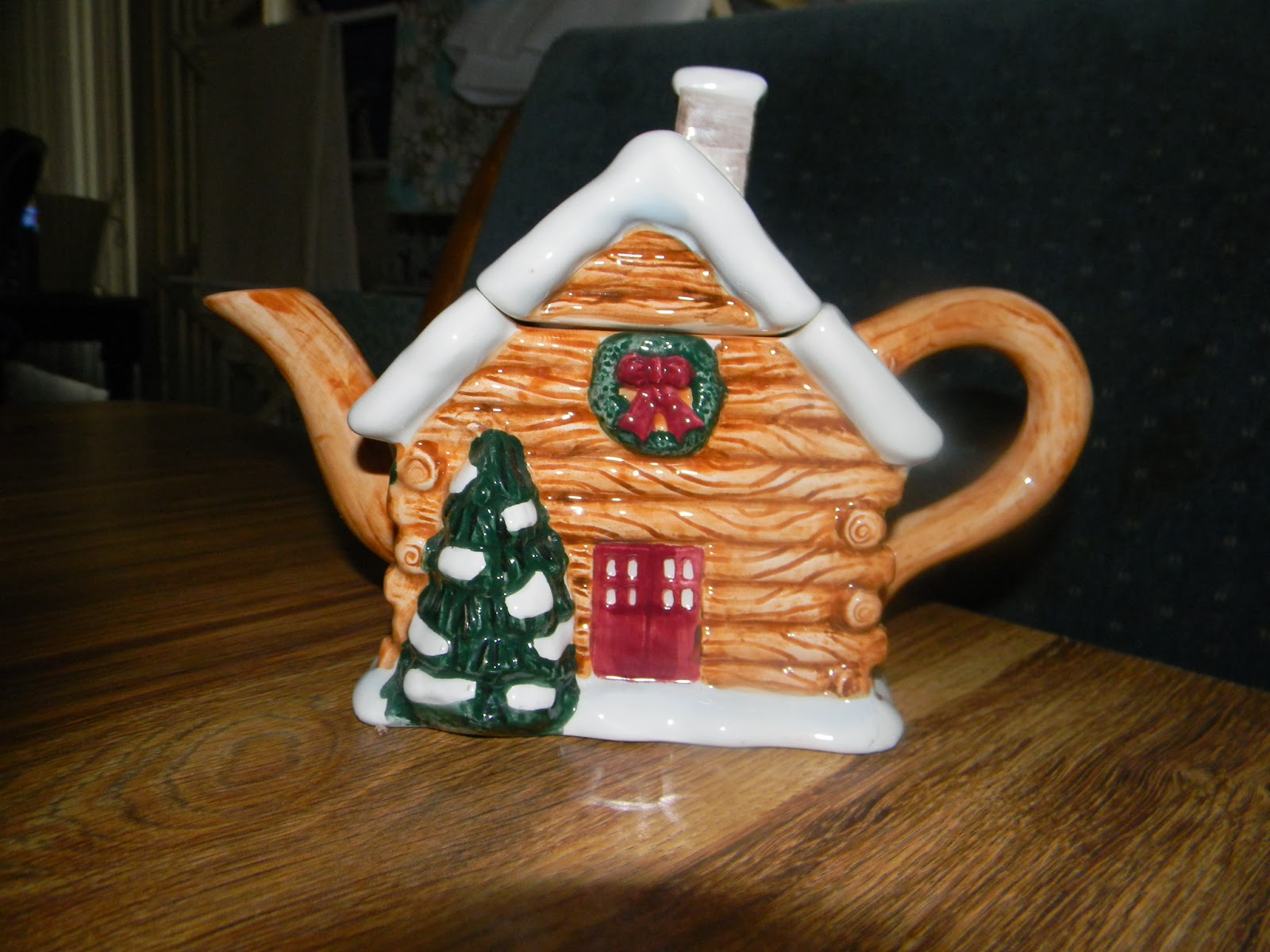 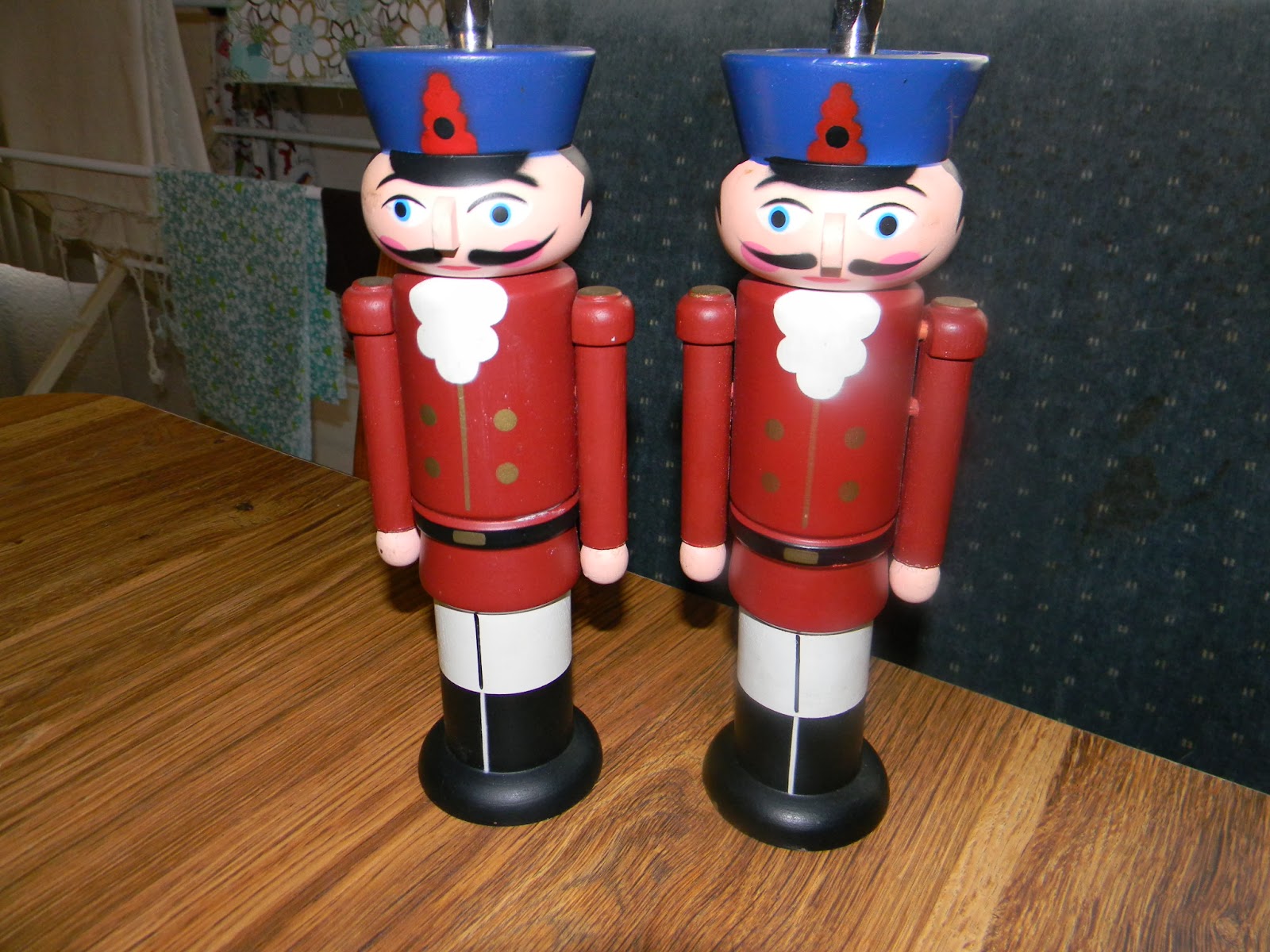 We ended the evening by going to City Lights for supper.  The food was good although not fabulous.  Matt ordered garlic mashed potatoes and was disappointed to find they were instant garlic flavored potatoes.  Considering the cost of their meals, they should be serving the real stuff.  I had similar problems with my loaded baked potato which just had cheese and bacon on it - they forgot the sour cream and butter so it was dry to say the least and the cheese was rubbery.  Our steaks were extremely good as was our dessert, a triple berry torte with ice cream, when we finally got it.  Matt's issue with his steak was that he'd ordered a ribeye and there was no bone in it.  I tried their tiramisu martini and loved it, it really tasted like tiramisu.  Our service initially was good but our waitress was the bartender and after the bar and restaurant started getting busy we didn't see her again.  It took nearly 45 minutes to get our dessert after we ordered it and we had to wait nearly that long to get our check so we could leave and Matt had to flag down another waitress to get it.  It was nice to try a new restaurant but I doubt we'll go back.
at November 24, 2013