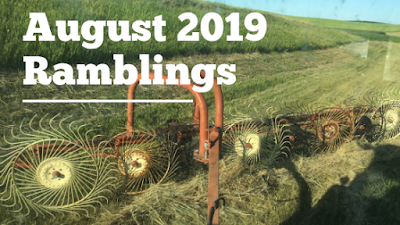 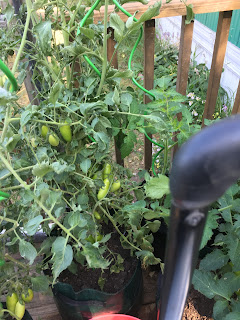 Good morning! We woke to a gloriously cool morning with the temp in the house about 69'. It was cool enough it woke me up and I almost got up to get a blanket but decided not to and snuggled up with Mr. B instead. I grabbed my heavy winter robe when I got up instead of my cotton one too and when I got dressed I pulled a sweater out of my winter stash to put on. Definitely my type of a morning and a blessing to start the morning on my day off. Temps are supposed to be back up close to 80' again today though so I will enjoy these brief glimpses that tell me fall isn't too far away. I brewed some tea up for ice tea later in the day when it gets warmer. 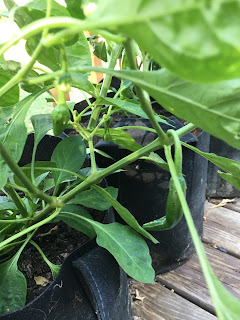 My patio garden is growing and has started producing. I finally have baby peppers. We've been having temps in the mid to high 80's for the last couple weeks and it's been doing wonders for my garden but depleting my energy - I just don't seem to be able to handle high temperatures like I use to and end up feeling like an overcooked limp noodle with no energy. 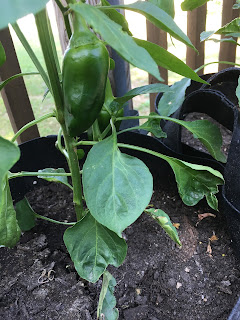 I'm so excited but a bit worried that something will happen to all my glorious tomatoes that are ripening. I have the worse luck with tomatoes for some reason but I keep trying! I have big plans for marinara sauce for those beauties if they ripen. Hadley has already tried to take a bit out of one on the vine and Jasper this past weekend picked one and brought it in and handed it to me so proudly. I hated to scold him but he can't pick until grandma says he can. I've also been craving bacon-wrapped jalapeno poppers so I hope my pepper plants produce well. 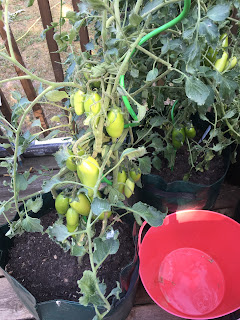 I've also been harvesting my chamomile flowers to make tea with. I bought a dehydrating rack to hang and start dehydrating my herbs. It's a LOT bigger than I thought it would be - 2' across - so it's going to take up some room. I will need Mr. B to put some type of hook up for me to hang it on, probably in Jasper's room so it's not in sunlight. Jasper was trying to figure out what it was for so I picked some sage leaves and put them in it so he could sort of an idea of what I was going to do with it. My son thought it was for Jasper's toys. I have mint, chocolate mint, oregano, sage, rosemary and dill I want to dehydrate. 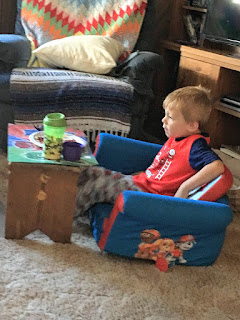 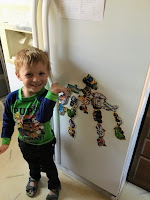 Jasper turned 4 years old this week!!!! I thought they were going to be up for the entire week so I was caught unprepared when my son announced Monday night they were leaving the next morning. What!!!! So I grabbed a no-bake cherry cheesecake mix out of the cabinet (since I didn't have any cake mixes) and Jasper got a birthday cheesecake. So much for the birthday cake I was going to pick up and his presents.

I had bought some magnets in car shapes and he designed a transformer on my refrigerator with them. He also used his legos to make a monster that actually looked like a monster so he's getting pretty good!

We took them to Demolition Derby on Sunday in Balta. He was a little scared of all the noise the cars made but then got into it. He doesn't like loud noises and I should have taken his ear protection I bought when he went to the Mud Truck Fest with us. He helped me take the picture of the cars in the pit with my phone. 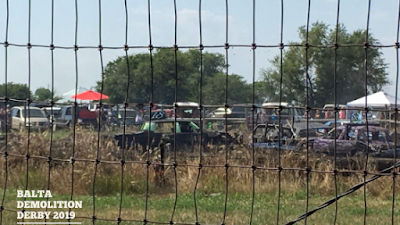 I am truly addicted to the Agatha Raisin Mystery Series by M.C. Beaton. The two audiobooks I'd already bought and listened to were out of order so I've gone back and started with book 1, The Quiche of Death, and book 2, The Vicious Vet. I bought these on July 30th and I've already listened to both. As I mentioned in my last blog, I have a lot of travel time to listen to books. I've gotten so caught up in these I've listened to them after I've gotten home too. I was going to try and watch the TV series, but immediately took a dislike of the woman they have playing Agatha. In the book, she's described as a stout woman with short brown hair. The actress they have is nothing like the description - she's skinny and BLOND!!!! Seriously, couldn't they have at least dyed her hair brown!

I also ordered a used copy of Trim Healthy Mama Plan off Amazon and the Audible version. I want to get the spiral cookbooks but at over $30 a piece that's a chunk of change so I'm going to investigate Ebay and see if I can find them cheaper. Since my injury, in February, I have packed on extra poundage, which I wasn't surprised about since I was laid up on the couch for over two months. I thought when I started working again I'd drop it but I only dropped a few pounds and the rest needs to go! I've experimented with possibly doing Keto but I've noticed major mood swings every time I've tried to start it. From the research I've done recently I think this approach might be a better option. I'll keep you updated! They sound like a hoot on the podcast I listened to so I added them to my subscribed podcast list. I've been neglecting my podcast though due to my addiction to Agatha Raisin.