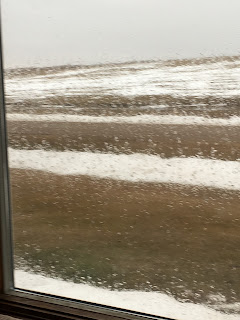 It was a cold, gray windy and rainy day Thursday - which suits my mood. The rain had turned into a mix of rain, ice pellets and snow so it was an ugly day. Thankfully that mess quit before I left for town for my physical therapy appointment. I had very little motivation and just want to curl up with a blanket and sleep. I know it's because I was gone so much Wednesday and my body needed to recharge so I planned to take it easy after I got home from physical therapy.  I really would have preferred some sunshine to sunbath in through the window or sitting on the bench swing.to help recharge my batteries but nature hasn't cooperated this week.

So my plans for the day consisted of doing a quick pickup, unloading the dishwasher and curling up with my new books and magazine for the afternoon.  I finally got to Barnes and Noble on Wednesday to use the gift card that I got for Valentine's Day. Nothing I'd hope to accomplish got done due to events I describe below.


I took Annie, Mr. B's border collie, to the vet Wednesday as she had been having a lot of problems and had stopped walking or getting up. Blood work confirmed she had diabetes along with some other serious issues including kidney issues (from diabetes), a sinus infection and an infection in one of her legs that he wasn't sure the cause of. She was under close supervision as she was not doing well at all. The vet did multiple x-rays to rule out a couple possibilities and gave her two injections of antibiotics at the office and sent her home on insulin, an antibiotic and an anti-inflammatory.

When I got back from physical therapy Thursday I walked in and saw pale red blood scattered across on the kitchen floor. Being in the medical field, I was glad to see no bright red blood. It appeared she cut or bit her tongue and that was where the blood was coming from and mixing with her saliva (she had been drooling). I almost wonder if she might have had a seizure while I was gone. She wanted to continually drink water (a symptom of diabetes) so I had to put the water bowl on the counter and give her limited amounts or she'd drink until she threw up. Babies and pets are the worse when they're sick and have no way to communicate with us.

I did some research and the essential oils that are good for humans are good for dogs with sinus issues so I put some eucalyptus, peppermint and lavender in the diffuser. I thought it helped a little bit, she didn't sound as labored.

Unfortunately, Annie passed while Mr. B was trying to give her the evening medications after he got home. We had thought she might be able to make a recovery as she was only about 10 or 11 years old. It's been a rough winter. The kids lost two of their cats and a horse and we've lost two dogs since the beginning of the year. 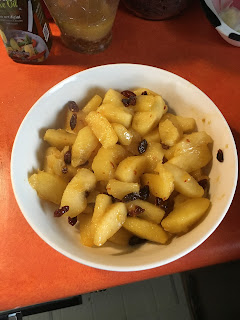 I've been reading off and on for years about Ayurveda, a medical system that originated in India over 2000 years ago. There are three dosha types and I'm a Pitta or Pitta-Kapha, depending on which test I take. One of the books I just bought encourages you to eat based on how you feel at that moment, so you have to listen to your body. Since I've been feeling the cold and damp outside I decided to try one of their suggested breakfast ideas of cooked apples.

I took some apples that were starting to wrinkle and weren't pretty, peeled and cut them into thick slices. Then I put the apple slices into a saucepan with a little water and cooked on medium. The water was cooking off so I decided to use one of Jasper's apple juice packets and add some apple juice to boost the flavor a bit. I cooked the apples until they were tender but still firm, don't overcook as you don't want applesauce. I threw some Wolfberries / Gogi berries into the pot as I didn't have any cranberries for a pop of sweetness then added a bit of honey and a couple pinches of cardamon. Ayurvedic theory says not to combine fruit and dairy but I added a tablespoon or so of cream to it as it needed a bit of something. It was a nice light breakfast and I used up some apples that would have gone bad otherwise.
at April 06, 2019