Wow, October is gone and November is almost over so I'm way behind on blogging. I started and completed a CNA course. I quit working at Walmart right before I started taking the CNA class. I'm glad I did because the 5 week course was intense. I took my state test a week ago so I'm hoping to know soon if I passed. I'm hoping to be working at a nursing home within the next two weeks, I can't start officially until my passing score posts.

Recently I started dating a farmer who lives 2.5 hours north of Jamestown so I have been playing the gypsy and driving a lot of miles. My first weekend visiting him at his farm I was blessed to be able to help harvest soybeans. It was very educational and a lot of fun for me. The hours that farmers spend in their tractors is unbelievable to say the least. We did 13 hours on Saturday alone. I'll be honest my butt hurt afterwards from all that sitting.

Lacey enjoys herself very much on the visits. When she's at the farm she does do a slow run from the house to the shed which still amazes me with how arthritic she is. She LOVES kittens and tried to play with a couple but got her nose scratched for her efforts. She was in dog heaven nonetheless. Since then she's been leery of the smaller barn kittens. As soon as she sees me start packing she starts getting excited and worries I'll leave her behind when I go up for weekends.
My arrival the first weekend was an adventure as he wasn't able to meet me as planned due to a combine breaking down before I arrived. His son met me at his farm and transported me to where his boss was unloading beans, who kindly let me ride with him and his 4-year-old some out to the field.  I've never driven in a semi before and was surprised at how comfortable they are. His boss's sons spend a lot of time in the tractors and combines between riding with him and their grandparents who drive the combines. I'd forgotten how child friendly farmers are - it was so nice and refreshing.  Field repairs on the combine were routine unfortunately so harvesting went slower then normal.  There was even a fire in one of the combines!


The views from the tractor were beautiful. Fall colors everywhere. He refers to his tractor as his office. I keep telling him he has the best office view ever.

Jasper joined us a couple weekends ago and had a blast. One weekend up there and you'd think he was raised on a farm the way he walks around like he knows what he's doing. He's all boy too and has to check out all the boy toys in the shed. His favorite is the Harley although all the snowmobile sleds attracted him too. Since then when Jasper's at the farm he follows him around a tries to copy everything he sees him do. It can be pretty funny. 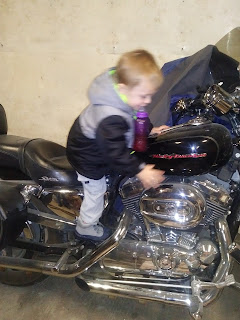 Jordon, Jasper and I spent Thanksgiving up at the farm. It's been quite a while since I've done a large holiday meal and enjoyed cooking all day. Ham, cheesy scalloped potatoes, green bean casserole, homemade rolls, and pumpkin and apple pies. 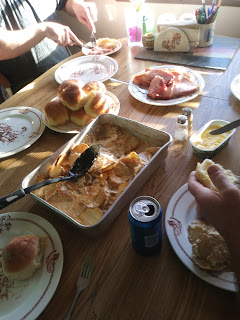