I can't say much due to ongoing legal issues but my grandson is safe and staying with us now.  Talk about life changing! I hadn't imagined at 51 I'd be taking care of a baby again on a regular basis.  As Matt put it, he didn't think he'd be experiencing parenting for the first time at 50. To say dealing with protective services, lawyers and two sheriff's departments has been sometimes very frustrating and I have to give Matt a huge thank you for taking the lead on dealing with this as I was adjusting to a new job and job schedules.  My son being awarded custody was a huge early Christmas present for all of us. There's still more legal stuff to deal with and we'll do the best we can with that.  Now to figure out how to keep my house looking and feeling warm and inviting with a toddler running around.

I'm starting to settle in at my new job as a legal secretary. It's been slow getting up to speed and I'm not there yet due to the fact the office is so busy and my boss hasn't had time to train me very much. Thankfully this week she was able to show me how to do a couple new things. The firm I work at now primary does real estate, estates/wills and such.  He no longer takes cases that require litigation for the most part.  He's done well in his career and can now decide what he wants to take and not take and when he wants to work or not work. 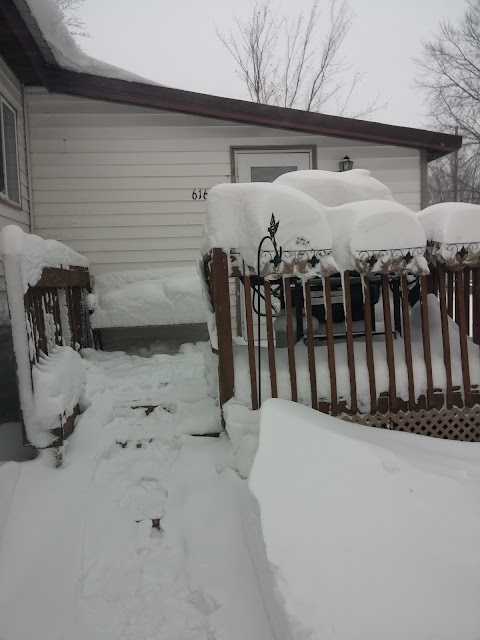 We had our first blizzard of the year this week and what a blizzard it was! The entire state shut down for the most part. They'd predicted 3 to 5 inches in our area and I think we ended up with around 14 inches. After the storm stopped the winds picked up and we experienced white out conditions and severe drifts to the point they shut down all interstate traffic.  Semi trucks were parked up at Walmart almost to the point it was difficult to find parking spots for employees or customers.  Those parked and travelers that took refuge at local hotels shopped and caught up on laundry.  After two days of the state being shut down they are finally reopening the freeways and the trucks are starting to move.


If you've never driven in prairie country it's hard to understand how deadly the winds can be this time of year.  When there are no buildings or trees to block them they just pick up speed and even semi trucks aren't safe from being blown off the roads.  Add slick road conditions and the danger increases more.  I was able to make it in both days to my job but the roads were an obstacle course of drifts to plow through, this is when I realize how awesome 4-wheel drive vehicles are. My son has a Taurus. He made it to work but couldn't get home in it so a coworker was kind enough to give him a ride home. His car just wasn't equal to 2+ foot snowdrifts.