Where did this year go? Am I the only person who feels like every year goes by faster and faster?  I can't believe November is almost over! It's been a roller coaster ride this month with lots of changes.

I decided to start working on getting organized for next year and found some wonderful planners on Etsy. I ended up buying several from iorganizemylife. I really liked his Vintage Home planners and bought several. You can't beat the kitchen set for $2.56, especially when you can reprint and use them over and over. He didn't have a check register one so I emailed him and he said it was on the to-do list and he'd move it to the top since I requested it. I ended up buying a pretty pink faux leather covered planner instead of using the calendar set like I'd initially planned but I have it to use in the future.

The start of the explosion of blessings this month was getting an email from one of my Mary Jane's Farm pals telling me to check out the Farmgirl of the Month chatter. I was shocked to say the least that I'd been named November Farmgirl of the Month! It was a huge honor. If you haven't checked out Mary Jane's farm website you really need to. Her magazine is awesome and she also has an online Sisterhood digital membership with newsletter as well.  My Sisterhood membership was due so they kindly renewed that for a year and sent me "Go Where the Peace Is" by Melody Ross. I haven't had a chance to read it yet. 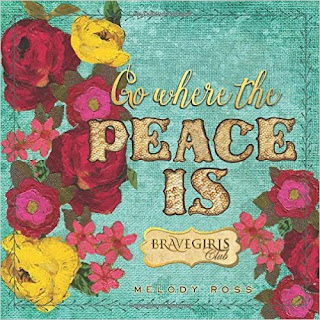 The next blessing was an offer of a job from a local law firm, which I accepted. I'll be working from an office now instead of home. It was also a part time position so I've had to change my schedule at Walmart and increase my hours there to compensate, at least until my pet sitting business is more consistent. I worked for a law firm in Michigan for six years before moving here. Law was extremely interesting and I had actually started going to collage to get my degree as a paralegal but had to stop after my divorce.

My pet sitting service, Prairie Critter Pet Sitter, is flourishing! I was totally booked for the Thanksgiving holiday. I even got a call on Black Friday to book for Christmas! It's a lot of fun hanging out with the dogs but it's also very time consuming because I give the pampering of my time to them.

Yes, I basically work three jobs. I was getting a bit frayed around the edges and Matt kindly gifted me with TWO massage gift certificates for my birthday. Isn't he wonderful! I'm hoping to use one this week. 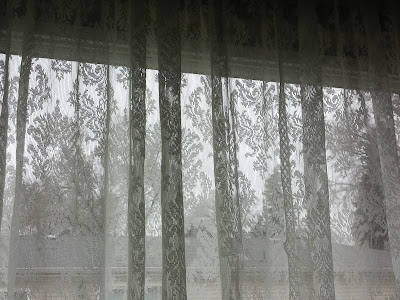 The blind in front of my work computer was driving me crazy. I HATE blinds, especially vertical ones. They'd gotten to the point where they didn't want to close correctly and the slats wouldn't always move the correct way. I decided since I had to look at those suckers all the time I deserved to look at something I liked so I replaced the nasty horizontal blinds with lace panels. Such a difference! I bought a double rod set so if I need to I can add a set of thermal curtains in the winter.  We'll see how the new windows are.

Matt had 10 days off over the holiday so he worked on getting some items off the honey-do list. One of them I was excited about was putting shelves up in the dining area. As you can see from the before picture it was a mess of stuff we had accumulated there. I have disliked this area since we moved in and wish we could afford to replace this entire unit but I have to make do for now.

I'm working on trying to make this cabinet more primitive looking. Future work will be replacing the plastic amber colored plastic glass with either chicken wire or possibly a glass with bubbles in it so it looks older. I'm considering painting the unit but can't decide on a color. I found some door pulls that look similar to the brackets we used and plan to get those switched out in the near future. 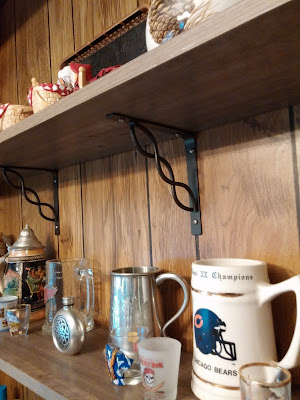 Nonetheless, I'm excited that Matt's stein and shot glass collection and my teapot collection can finally be seen.