Fall is my favorite season and probably one of the largest food seasons there is, at least here in the States.  Fall with Harvest celebrations and Halloween start the food season that just keeps going through Thanksgiving, Christmas and then New Years celebrations. I'm really not sure why we don't have more food celebrations during the winter when we need them so much but suspect that our ancestors needed to save their food supplies and getting places was probably difficult. In Denmark they entertain (hygge) and have a lot of meals with friends and family during the dark months of winter and it's an area I think many of us would be wise to emulate. The light tons of candles, sit at the table with family and/or friends and eat.  Who wouldn't like doing that!  Meals don't have to be elaborate, simple meals can be great too.  Smorgasbord and pot luck to me are pretty much the same thing, have everybody bring something and enjoy.

For centuries Fall was the time of harvest and of preserving the harvest.  I remember going to my grandmother's house and helping pick and prep food from the garden and from the vegetable stand we use to go to.  I remember hours sitting under the tree out back shucking peas and stringing beans with grandma.  I loved going to the farm where we bought vegetables.  They had tons of chickens and other animals but the peacocks were my favorite.  I could stand forever watching the peacocks. Occasionally Grandma would give me money to buy a peacock feather to take home.  These memories are dear to me as she passed about 30 years ago.

This year I had to put my desire to do major canning aside to take care of things that were going on here.  My son needed to make a quick move back here to Jamestown so we had nearly a month of them spending the weekends with us while we helped them look for an apartment and work. Thankfully Jordon was able to get a job quickly and we got them moved.  Those would have been the last weeks of the harvesting in our area so I missed out this year but that's okay.  I now have the grandbaby close to me and I'm having a great time introducing him to new foods.

In the fall, just before winter arrived, would have been the time they would have slaughtered the animals for the winter so they wouldn't have to feed as many animals and it would have been cold enough so the meat could be left outside until the finished processing it without going bad.  Various methods of preserving the meat to keep it through the winter would have been used such as salting, smoking, and canning. Nowadays we can use these methods any time of year and we don't need to wait to make our favorite recipes. 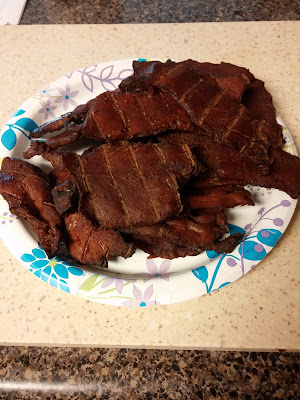 Matt finished making some delicious venison jerky today using several packages of the venison we still had in the freezer.  Jerky is roughly a two day process, one day to season and smoking on the second day.  He also started brining the pork roasts for making Canadian Bacon.  This is our third batch of Canadian Bacon and it is delicious!  Canadian Bacon has a four day processing time as it sits in the brine for three days and then you smoke on the forth.  After you have homemade you can't buy it from the grocery store any more.
at October 19, 2016