Flashback: I loved watching the Waltons on TV growing up and even later.  I loved the large, close knit family.  I LOVED their house. The house would be way too large for us at this point in our lives but it would have been awesome when I had kids at home.

HOME PROJECTS:
June shaped up to be another super busy month for us. Matt and his buddy Nick, along with some muscle help from Jordon, got our new windows put in. It's a good thing because the one set probably wouldn't have survived another summer.  It was so rotted that when they went to pick the window up to place it on the trailer it broke apart. The new windows look great.  Matt worked over the weekend and got the outside finished.  Now he needs to finish off the inside portion.  We now only have one small window left that was original to the house that needs replaced. Thankfully it's in much better shape than these windows were.


As you can see we don't have steps out this door and haven't since we moved in for the simple reason we can't agree on what we want.  I would like a deck with a ramp for the dogs and to eventually fence this side.  A gazebo style deck where I could sit and relax would be awesome.  We have a small deck on the other side but it's filled with the grill and smoker so there's no room for me and the dogs to just hang.  My garden is on this side of the house towards the back. Matt wants just a basic set of steps. We'll figure it out eventually. 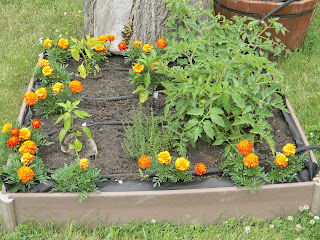 I finally got to work in the garden and tore out all the dead plants from last year.  We shoveled all the dirt into the wheelbarrow and I put weed blocking fabric on the bottom and then put the soil mixed with compost back in the bed.  I over planted this small bed last year so I was more minimalistic this year in planting it.  I also used the barrel that we had tried to grow tomatoes in for herbs this year. Hopefully the garden will do better.  Unfortunately they're not selling these pre-made beds any more so I'm going to have to order online to be able to expand. 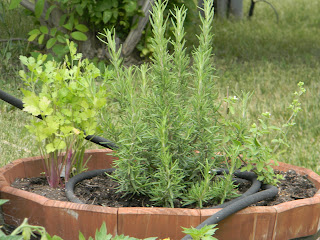 Matt's been doing a lot of cooking with the smoker.  He made some homemade Canadian bacon. Thank you to his brother-in-law Doug for the recipe for that!  It's addictive and will be a frequent item in the smoker from now on I can assure you.  He made me some homemade McMuffins with the Canadian bacon and the taste was unbelievable.  What a difference in the taste.  We also used some for a Spicy Hawaiian Pizza.  He also did bacon wrapped jalapeno poppers that disappeared very quickly.

Someone on one of my Facebook groups posted she'd fixed a cup of hibiscus blueberry tea which sounded so good I decided to try making some myself.  I took some blueberries and put into the bottom of my cup and then brewed them with my loose leaf hibiscus before adding honey.  I've made this several times it was so good. I used Mountain Rose Hibiscus High Tea.  Sorry about the poor picture. 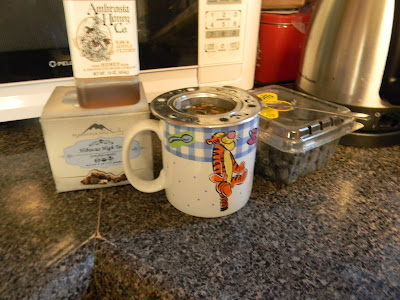 I picked up another Sue Henry mystery, The End of the Road (A Maxie McNabb Mystery).  I was a little concerned by the title but be assured nothing happens to Maxie.  I really like how she brings characters from her other mysteries into different storylines.  I need to order a couple more by this author to read.  I have a friend I plan to loan one of the Maxie McNabb Mystery books to as I think she'd really like the series.

Brocante Home Living Room forum on Facebook read and discussed Slow Love - How I Lost My Job, Put On My Pajamas & Found Happiness. It definitely was not a book I would have chosen on my own.  Her ongoing relationship with a married man just made many of us want to smack her and honestly the stupidity of her trying to keep that relationship going would have probably been enough for me not not have finished the book if it wasn't for it being a discussion assignment.  I just found it really difficult to respect the author through most of the book even though she published multiple magazines nationwide and had written other books but others loved it and thought it was a great book about recovering from a life disaster.  Several of us brought up we had problems having any sympathy for her having to sell her house after she finally mentions that she has another house, her vacation house, she'll be decamping to in Connecticut.

Fiona Ferris continues adding to her series on living French with How to Live Well.  Some good ideas although some can be found on multiple other sites and articles.  It's a short book.  I believe it was $2.99 for the Kindle version so very reasonably priced.