We've been doing a bit of traveling last month so I didn't get to post.  Matt's mom passed away.  We were fortunate to be able to be able to fly out and visit with her less than two weeks before she passed.  All her children were able to visit before her passing.  We spent eight days in Michigan helping with her care.  I think she had a peaceful passing.  Matt rarely gives me flowers but surprised me after we got back with a bouquet.  Aren't they beautiful!  I love roses and sunflowers. 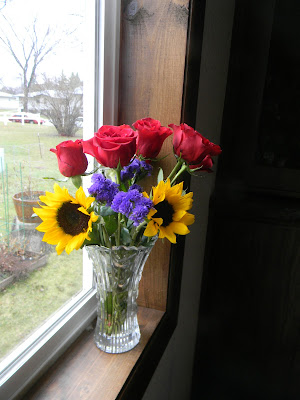 We had a nice time visiting with his family.  Matt's got six siblings and we got to spend time with all but one.  We stayed with one of his sisters.  She had been in the Middle East visiting another of his sisters and brought back several items.  One of those items was candy coated fennel seeds.  You eat a spoonful after meals to refresh your breath and help with digestion. I was addicted the first spoon I had.  She was awesome and sent me some after we got back so I have a small jar sitting next to my computer desk to nibble on.

I was able to visit with some of my awesome girlfriends while there.  I miss these girls so much. I hadn't realized how much I missed this group until I heard Arwen's voice when I called to let her know we were coming,  We don't get to talk very often.  Jenna, who I refer to as my adopted daughter, and Cora came to surprise me.  It was a very wonderful night and even though we parted sometime around 2 am in the morning it was way too short.  I think Matt was a bit miffed that I didn't have a massive hangover the next morning.  Saprenia had the hookup for some awesome, potent Long Island Iced Teas and we probably should have just started ordering them by the pitcher as many as we drank.  I can't let another four years go by without hanging out with them.


I've finally launched my new business, Prairie Critter Pet Sitter, LLC.  I've had a client already too. My first clients were a St. Bernard and a Springer Spaniel.  They were adorable and fun to hang out with.  Matt's buddy is letting me put a small decal on his race car for advertising.  I've also been doing a Facebook blast.  I need to get out to all the vet offices and post fliers.

We were able to get a bit of garage saling in.  I found this adorable cow butter dish for 50c.  I don't like plastic but it was just too cute to pass up. 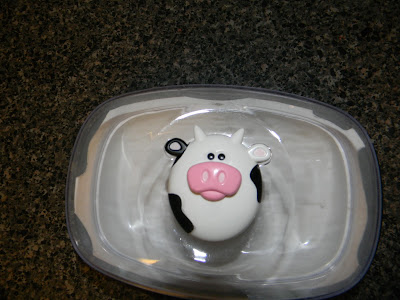 Sunday I decided to try canning meat for the first time.  I'd found a good deal on hamburger up at Hugo's last week and froze several large packages.  Sunday I fried it and canned it in pint & half jars. I got the instructions for it from Linda's Pantry on Youtube.  I think it will be great for camping and for when I forget to take something out of the freezer.  I had a bit over 11 pounds of raw burger and ended up with 8 jars, each having 1 pound of cooked meat in them.  These are dry packed. 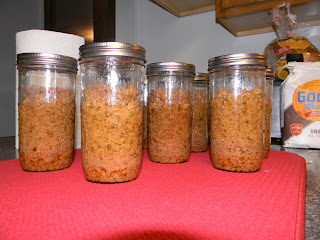