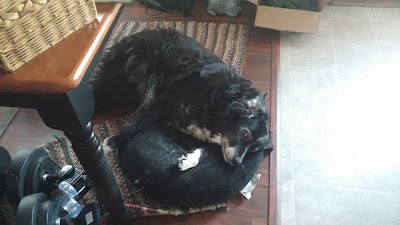 I've had crushing news from the vet this month, Tip, my male border collie, has congestive heart failure.  So for now, more meds to try to and make him comfortable, but the prognosis from what I've read is 6 to 18 months. His tolerance has dropped significantly for any type of exercise. It also explains his intolerance for the heat of summer. I'm finding the idea of my pack without Tip in it really hard to imagine. He's been an unbelievably awesome dog. So for the time he has left I'll keep him as comfortable as I can but knowing at some point I will have to make the decision to ensure he doesn't suffer.

About two weeks after the above diagnosis he started having bloody diarrhea so I rushed him to the vet.  Due to his recent diagnosis of congestive heart failure, I had to prepare myself for the possibility that this could be it for him. He's always had bouts of diarrhea after storms or fireworks but it typically cleared up within a couple days.  Apparently the back-to-back severe storms we recently had started a domino effect with the diarrhea.  New diagnosis is stress induced colitis.  Three new medications added to his pharmacy and I have to change to a bland food for him.  I also need to try to keep him from getting stressed out to avoid triggering further bouts.

I've also had to make the decision to change vets.  I like the vet I've been using and she came highly recommended BUT she has no after hours or emergency coverage.  With three geriatric dogs I cannot chance not being able to get vet care if I need it.  There's only one vet clinic in town, Southwood, that has emergency vet service and they no longer take other vet's clients.  After discovering the blood on a Friday afternoon I attempted to contact my vet about 2'ish in the afternoon to be told she'd just left for the weekend.  They suggested I try another vet in town so I called Southwood and thankfully they were able to get me in. I was very happy with the vet, Anna. I took in a stool sample and I know my previous vet would have run tests on the sample before seeing Tip but she held off until she did the exam and determined it wasn't needed.  I appreciated not having to spend more money.  Within  two days of starting the new meds he was acting almost totally normal again without the lethargy he'd been having.  He's honestly acting awesome so I'm really happy. 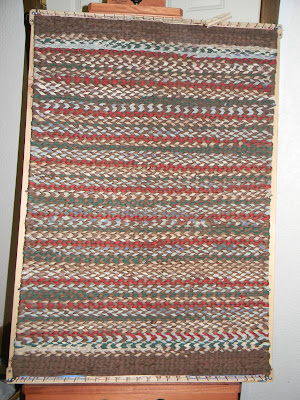 I finally finished the rug I've had in the loom forever.  I'm really happy with it and love the earthy tones. I'm still planning on putting it in the camper as it will go great with my cabin/lodge theme. Now to go through my fabric stash to decide what colors my next rug will be.

I used some wooden needles I bought from Carrol's Farm Crafts on Etsy to finish up the last row or so.  It made it so much easier to get into the tight spaces between rows.  These are beautiful handcrafted needles too.  They're designed for using to make Amish Toothbrush Rugs but work awesome for twined rugs as well. 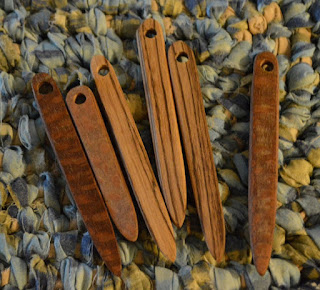 The camper tearout is almost complete.  Matt just needs to pull out the electrical. It's been a hard job for him and he's done a great job of it.

The last picture has the bathroom tearout section with the shower pan still not taken out yet. We've decided not to replace several things:
THRIFTING:

I went thrifting and picked up a lot of good books cheap.  I think most of the books were like 50c each.  This is just a couple of the books I picked up. 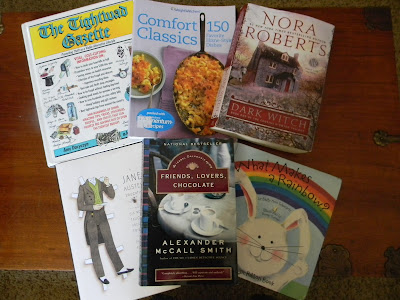 In addition, I found two mini donut pans for 99c each!  I was so excited to find them as I needed at least one more pan for when I make donuts when the crew is here. 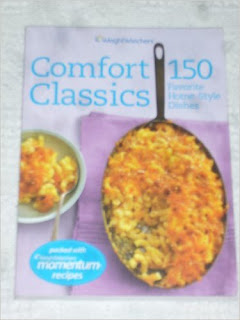 Comfort Classics is an excellent cookbook from Weight Watchers.  There are several recipes I want to try out although I'll use full fat options instead of the low-fat ones.


Dark Witch is the first in Nora Roberts The Cousins O'Dwyer Trilogy.  I remember buying this on a Kindle special and started the first two chapters and then forgot about it.  I'm glad I have the book format now as this is a keeper.  I just ordered the next book in the series from PaperBackSwap. Unfortunately they don't have the third one so I added it to my wishlist.  I may have to look for a used copy on Amazon.  This series reminds me somewhat of The Three Sisters trilogy and The Donovan Legacy trilogy. 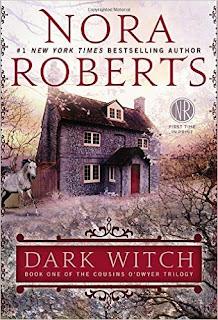