April Ramblings - A Thrifting We Will Go

We had the kids over two weeks ago for Jordon's birthday and had a good time thrift shopping while they were here.  There was a new flea market that was open that weekend and we also went to a couple thrift stores. We found a lot of great items.  Since the lil guy is crawling now and it won't be long until he's walking I decided to start buying some good toys for him.  I found a great toddler barn set with animals and tractors at the flea market to start the collection.  I need to get a toy box to put stuff in so I'm keeping an eye out for one.  One of my neighbors bought him a set of baby Carhartt bib overalls so he'll be properly dressed to play with the farm set.

I picked him up a high chair at the thrift store.  They don't have one since they don't have a table set yet so it was totally new for him and he loved it.  He didn't want to leave it even though he was falling asleep in it while we played a game at the table.  I still have a lullaby cd that I use to play when Jordon was a baby that I played while he was here.

Saturday morning he decided he needed to crawl across the room and use Tip to try and stand up.  Tip was a great sport and as soon as I got the picture I had Tip move to a safer location.  I'll need to keep an eye on him while he's here so he doesn't accidentally injure one of the dogs.  He got up on Oreo's blind twice and tried to grab her. 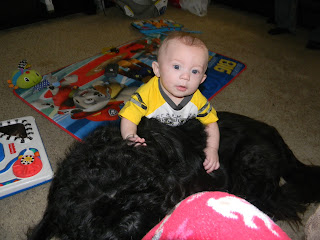 While at the flea market we picked up a treadle sewing machine base to use for the base of some bookcases we'd bought from a neighbor.  We picked up several items she was getting rid of and I'll be posting as I get them organized.  The bookcases are definitely antiques.  The glass has dimples and waves to it.  By putting it on the stand it eliminated us having to decide how to repair or replace the top of it.  Our neighbor had plants on it and there was water damage to the wood and it was peeling up.  I still need to clean these up and decide which books I'm moving into it.  We're thinking my classic reading collection would look good in here and possibly my cardinal figure collection.  The sewing machine base was pretty rusty so I used a metal brush to scrape off the loose bits and then used Rustoleum Forged Hammered paint in chestnut.  Matt didn't agree with me on the paint but really liked it after I got it painted. The hammered effect really worked well with the flaking texture of the metal.

I've been trying to get rid of all the blinds in the house.  I'd been looking online for some type of curtains for the dining room area.  I'd decided I wanted a small check with dark red and tan colors and had found some valances that were about $30+ for that window.  Guess what I found this weekend? Yep, a set of valances that fit on that window perfectly for $2.50!  It definitely changed the look of that corner.  I'm also thinking about getting some dark red folding shutters to put on the bottom for privacy at night so I can get rid of that blind.  I HATE blinds.

I also found another long valance with pine cones on it that will fit in perfect with my lodge/cabin theme for the camper for the same price. The valance is actually pretty wide and I think it will cover the entire window. 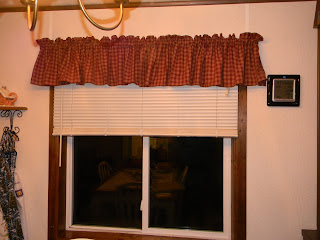 Another purchase I made was a new FoodSaver machine.  I'd gotten one years ago at a thrift store but haven't used it in years.  I tried to use it a couple weeks ago and the seal function wouldn't work.  Last week Amazon had a unit on special for $54 (1/2 price).  I checked it against Walmart's price and it was $97 so it was an awesome deal and I decided to grab it.  I had been really upset when I inventoried the freezers a couple weeks ago to find a lot of meat I'd put in freezer bags was freezer burned and I had to throw it out. The meat hadn't been in the freezer that long either.  I'll start using this for anything I put in the freezer now.  It also has the tube that you can seal jars with so I can use it for dehydrated things I put in jars.