It's going to be another extremely hectic month so my thoughts have been on how to de-stress meals this month. I'm scheduled to work five nights this week so my total working hours will be about 64, so simple is best. I'll definitely be ready for a week off at the end of the month. I haven't posted menus in a while so I thought I thought I'd post some of this weekends along with early next week's plans:

Saturday:
Fish & Chips - Matt had a hankering for this.

Sunday:
Mississippi Mud Roast with carrots and mashed potatoes - I worked from 12-4 today and Matt went with his buddy to Minnesota to pick up a race car so this worked perfectly.  I made the mashed potatoes after I got home and we had an early supper since we were both hungry.

I was blog hopping the other night and found a fantastic blog "I  am That Lady"with frugal tips and menu planning.  She has several books out on freezer and dump meals using Aldi.  Unfortunately we don't have Aldi's here but her menus and recipes can be used with regular store products.  I bought two of her books and plan to try several of the recipes. The Slow Cooker Thai Chicken looks fabulous and will be making an appearance soon.

One of our neighbors gave Jordon a love seat so Saturday we ran down to Lisbon, ND, to drop it off.  Neither of us had been down in that area.  It's a long drive, about 90 minutes.  The freeway wasn't too bad but once we turned off that and headed south my first comment was "This looks a lot like Ohio." For those that have never driven through Ohio, it's not a good comment. It was just so flat and bare. Once we turned east again we came upon gorgeous rolling hills, which reminded me a lot of Pennsylvania. I'd love to see what it looks like snow covered although I probably wouldn't want to be driving if it were.  Then we came upon SHEEP! Lots and lots of sheep! Oh the pups would have been going nuts with excitement if they'd  been with us. Lacey would have probably have given herself a heart attack. Of course I didn't have my camera with.  They were smaller sheep then what' I'm use to seeing. I'd be curious to know what breed they were. We actually passed two farms with sheep and on the second one there were piles of dirt and probably compost scattered throughout the huge pen and on ever one there was a single sheep standing on the top like a king (or queen) sheep of the pile.  Made me chuckle they looked so cute.

Jordon and his girlfriend when she was pregnant bought up every Pooh Bear they could find in the area.  The bought one that was missing a sweater so Jordon naturally assumed mom would be more than happy to knit one for him.  Needless to say it's sat for quite a while as I had other projects that took precedence but I finally started it last week and finished it Friday night.  Here's Pooh with his new sweater.  I wasn't totally happy with it, but as it was the first time I'd made one I try not to be took picky about it. They were happy with it so I guess that's what was important. 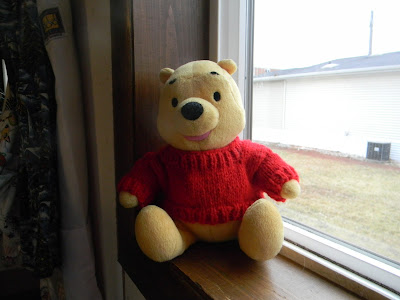