It's hard to believe November is nearly over already.  Time seems to be speeding way to fast lately. I did manage to get some fall decorations out for the month. We've had lots of projects we've been working on this month. It seems like our paychecks could just be sent directly to Menard's as often as we're there. We found some awesome deals there on Black Friday.  I almost never go shopping on Black Friday but we decided to brave it this year as Menard's deals were so good. I bought a couple Christmas presents too. We've gotten very spoiled living in a small town.  I think there were maybe 4 or 5 people ahead of us in line and we were complaining about having to wait so long. It's hard to remember the lines we use to have to stand in while living in Metro Detroit on a normal shopping day and during the holidays there seemed to be miles of lines.


Matt and I had Thanksgiving alone this year as Jordon went to his girlfriend's mom's house for the day. He said they'd come on the weekend and requested (okay nearly demanded) that I make the whole Thanksgiving turkey meal for him. He apparently was missing mom's cooking. I thought I'd made a ton of mashed potatoes but we ran out and he was complaining he didn't have enough. We had them over again this morning for breakfast. Matt had tried a baked caramel french toast recipe when he was hunting a couple weeks ago and had gotten the recipe so I made that and bacon this morning. Needless to say there were no leftovers, not even for the furkids.

As I mentioned, Matt went hunting a couple weekends ago and got a deer!!! I have venison in the freezer finally,  not as much as I would like but I can't complain. I have venison recipes dancing in my head while I try to figure out how I want to use the meat. Matt plans on using some of it for jerky but that will be a project for next month.


We've had snow a couple times so far this month but nothing that accumulated or stayed. The most we received was a light dusting.  We've had some beautiful snowflakes though that I enjoy watching while I'm working as you can see from the picture above. I use to want snow on my birthday (November 21st) and on Thanksgiving as a child.  I rarely ever got my wish but this year there were snowflakes dancing in the air when I got up on my birthday.  I was as excited as a kid when I saw them.


Our big project this month was removing the carpeting and putting down the wood laminate flooring in my office area.  My office is a huge open area between the dining room and living room. Matt pulled up the carpeting and put down all the matting one day and then got all the flooring in the next day.  He did an awesome job on it. We didn't add the base boards as we'll be replace the ceilings and walls with drywall next year and will do the moldings then. After Matt was done with the flooring I did a deep clean on the room, washing the walls and everything, before putting everything back in. Only 2 more rooms to re-floor and I think those can wait a bit. 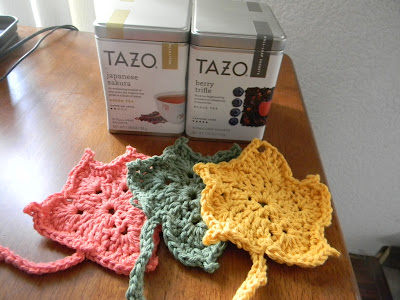 November is the month I pick for my Mary Jane's Farm tea exchange every year.  I picked two Tazo teas this year and made fall leaf coasters in three different colors. I fell in love with the pattern when I saw it and thought it fit with my fall theme. Everybody liked them. One woman said her kids took them and threw them up in the air and let them fall down, like they were playing with real leaves. 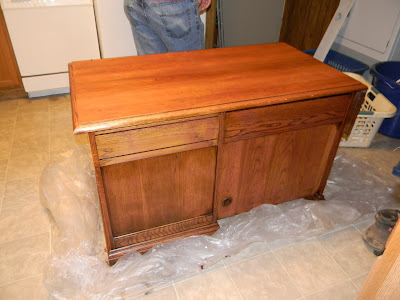 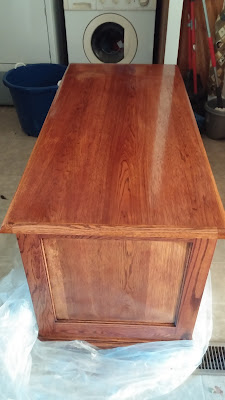 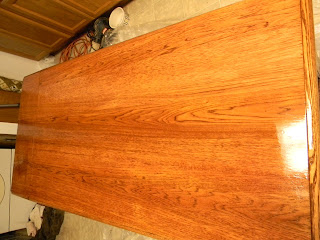 I finally have the desk done. I need to do the door on it and I think I'm going to put a shelf in that area. It was originally a computer tower compartment but I'm thinking I'll put a shelf in it since I'm using it for my sewing desk. I used a mahogany stain and the color in the pictures doesn't do justice to the beautiful color it came out. I'm very pleased with out this project turned out. The top came out so nice and I was able to get all the scratches off. This is the solid wood desk that I picked up curbside for free.

My last project of the month and I should finish it later today is a twined rug.  I warped it and started it a couple weeks ago. Since then I haven't had a chance to work on it so this week I've been working on it a bit each day.  This was made with recycled flannel sheets. One set was a solid blue and the other was a cream color with a floral pattern. You can't see the floral pattern at all, just bits of color. It should be nice and cozy on the feet for winter. I have about 4 inches left to do before I take it off the loom. I may keep this one although I'm not sure where I'll put it.