I can hardly believe that February is almost over already.  It doesn't even feel like we really had a winter it's been so mild here.  Back home in Indiana they're getting hit with storms dropping a foot or more of snow on them and all we've been getting are flakes. Another winter has gone and I still haven't gotten to try my snowshoes out.

Big changes are in the air!  We bought an older camper that we're going to be redoing this spring.  I am so excited and we're chomping at the bit to be able to start working on it. We'd initially thought to only repair the back bedroom area that had water damage but now we're thinking we'll pull the walls and ceiling out and redo them to make sure the electrical is okay and to put good insulation in.  I'm pretty set on a lodge/cabin feel for the inside but as it's only about 19' long I don't want to make it too dark inside so it feels cave like.  Pictures will be posted as we start working. I'm hoping we can finally visit Teddy Roosevelt National Park this fall. We'll be going to Minnesota possibly in August and will be taking the camper with.

Another big event is I'm starting a pet sitting service.  There's nothing like it here in town.  The kennel that was in town closed and the one vet that now does boarding from what I hear is constantly booked.  My objective is to offer people the ability to allow their pets to stay at home while they're gone and I will come in a set amount of times per day to feed, walk, etc... the pets.  So I'm crossing my fingers and I'll see how this works out.  I'm in the process of getting my business license, LLC, bonding, etc.. before I start putting out fliers. At this point I'm thinking part time but some are telling me they think I could take it full time if I chose.  That would be a huge decision though.  Small steps right now and I'll just focus on getting the business up and going for now. 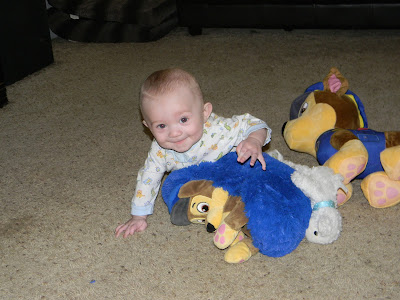 Jordon and the grandbaby were here last weekend.  He's trying to crawl now so we had to make sure to keep the floor clear.  He got himself from one side of the living room to the other after Lacey.  He grabbed a huge handful of her tail fur. She was a good sport about it and just laid there while we pried his fingers off.  Needless to say the rest of the weekend the dogs stayed clear of the little fellow. We took the kids up to Jonny B's for pizza since they hadn't been to the new pizza joint in town. There pizza is baked in a brick fire oven and is so good!  The kids liked it too.  Jordon's not a big drinker and so we had him try a flight of the different beers they carry (22 types on tap).  He liked the pear cider that I like and there was one beer that he enjoyed.  It's a good way to try different varieties without buying full size glasses.

Office Diffuser: I've been using the following combination the past two days and I'm in love with it. The scent gives a warm feeling to a room. My office diffuser calls for 5 drops but the Orange EO decided it called for another drop.

Bedroom Diffuser:  This is my recipe for nearly every night that diffuses while I'm sleeping.  It helps me breath and sleep better.  Matt noticed we were both sleeping better when I started using the diffuser in the bedroom. Matt says my snoring isn't as bad either.  Bedroom diffuser can take 12 drops. 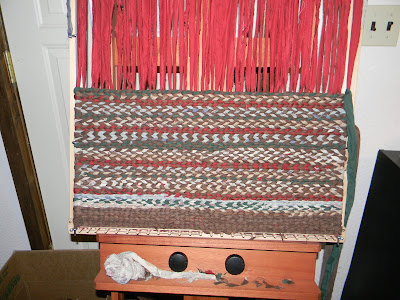 I've started a new rug in my loom.  I'm hoping it will fit in front of the kitchen area in the camper. I'm using leftover strips from my first crocheted rug so the colors are chocolate brown, tan, dark green, moss green and two prints. I'm loving the new easel that Matt bought me for Christmas.  It's a hard wood one and is so awesome.  Here's a picture with my twining loom. The adjustability is awesome.  If I want to sit I can adjust it down or if I want to stand I can move it up. 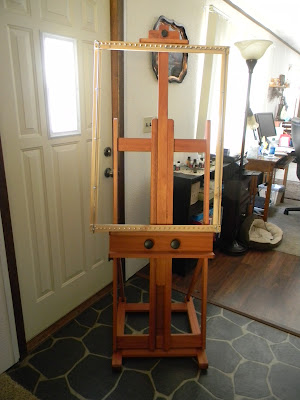 I've also managed to finish one sock and I'm working on the top portion of the second one.  I managed to knock most of the first one out while recovering from surgery the end of December. Matt's sister sent him a Care Package that he received today and inside were two skeins of sock yarn for me!!!! Bee is awesome and also a fellow sock knitter. 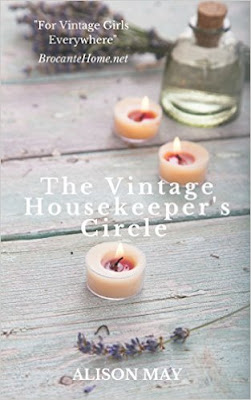 I found an awesome website called Brocante Home.  I liked it so much I signed up and paid for access to her private website as well. Before I signed up on the site I bought The Vintage Housekeeper's Circle by Alison May on Amazon for my Kindle.  I think it was $2.99, so very affordable.  Unfortunately her books on her website are much more expensive so I'm glad the membership allows me to read them without buying them.  I've also read her Winter and Spring books off the website.  These seasonal books are neat in that they give ideas on how to pamper oneself, things to use or add to the home, recipes for sprays, scrubs, etc.. reading suggestions and journaling ideas. 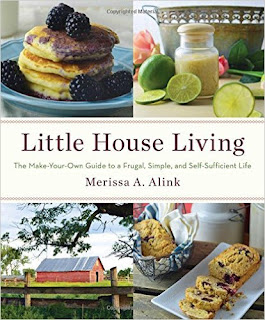 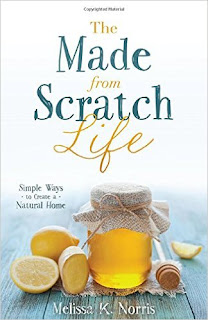 I've been somewhat on a prepper/housekeeping theme lately. I bought a hardcover of Little House Living and paperback of The Made from Scratch Life.  Both books have a lot of information on cooking and preparing foods such as mixes to use instead of store bought.  I highly recommend both books.  If you like Little House on the Prairie books you'll probably like Little House Living as she tries to model her housekeeping on Laura and her family.  It's made me want to reread the series again. If you Get The Made from Scratch Life there's a webpage that you can put your order confirmation number in and she gives you some freebees that are pretty neat as well.

In addition to reading I've been watching a lot of Youtube videos, which is rare for me.  I've never been big on Youtube for some reason.  I've found Linda's Pantry which I'm watching constantly of late.  She cans, cooks and has dogs so you can see why I like her.  Watching her videos got me wanting to can so I broke out my pressure cooker and did 16 pints of refried beans since I was out of them.  Linda's Pantry has a Facebook page now also, so you can check her out there as well. She mentioned she might start blogging in the last video I watched so I'll be excited to see when she starts that.