I decided to take an afternoon and enjoy spending it with Matt today so I took him to the Frontier Village for a buffalo burger at the General Store. I don't know why I'd forgotten about them serving buffalo burgers but it came back to me today when I was thinking we should go up to the Village before it closes for the season and see what they had. They make them fresh.  A basket with a buffalo burger and fries is $6, so an affordable meal. They have ice cream and shakes/malts as well for something cool. While we were waiting for our food, a friend that Matt used to work with came in with his family so they were able to chat and catch up. His friend and his family had picked up some fried chicken at Hugo's and had come for a picnic after church.

There are several buildings that have been moved to Frontier Village. There's a Saloon. They really should serve something in it like shots of root beer or sarsaparilla. They move this poker table outside when they have their monthly shootouts and have actors playing gamblers that end up in a shootout.

Besides the different buildings, they have several stores in old style homes that have been moved there.  Mary's Place is one of the homes and it sells things like quilts, aprons, and baby items.  I picked up an present for my son for Christmas.  This is the second item I've picked up for him this week.  I'm trying to be done with shopping by Thanksgiving this year. 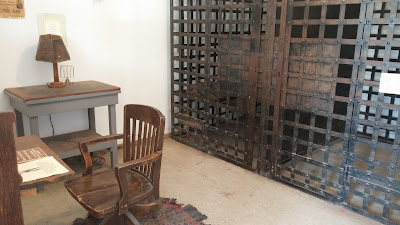 This is inside the Jail.  It's amazing how small jails use to be.  A desk, chair, the table the lamp is one, which probably wouldn't have been there, and the metal jail cell.

For those that don't know, Louis L'Amore used to live in Jamestown, North Dakota.  In fact we have a street named after him as well as a school. This is a building that is dedicated to him.  They have his entire collection of books along with interviews with him playing on a small TV. It's an interesting place to visit. There's a wraparound porch that goes along the side where the Law Office and Doll House are located. 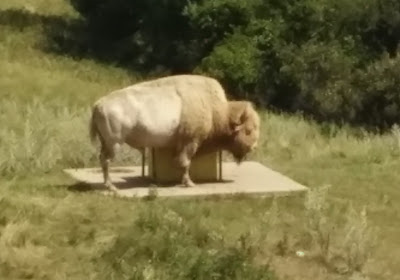 While we were walking back to the Doll House, I noticed one of the albino buffalo close by. You can tell the difference between an albino and a white buffalo by the color of their nose and hoofs.  An albino has a pink nose and pink hooves while a white buffalo has black hooves and nose. A white buffalo may later in life change colors and the fur become brown. 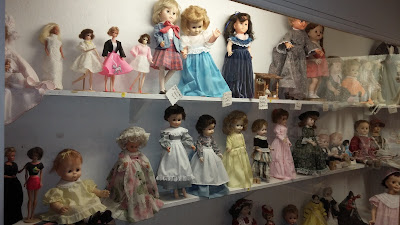 The dollhouse was closed the last time I was there so I'd never been in it.  It has three walls filled with dolls of different eras and vintages.  My Grandmother had a doll with a similar china head on it; although, hers had black hair.  I loved to be allowed to sit and hold it on the bed when I was little.  It was filled with sawdust.  My mom has it now and hopefully I will inherit it one day as it has special memories for me of time spent with my grandmother. 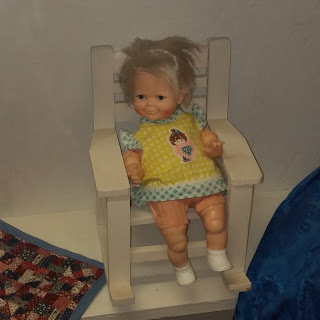 Some of the dolls were a little creepy. This one we both thought the face looked like Chucky. 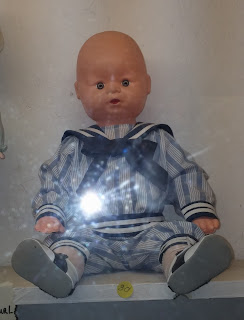 This one Matt thought the head looked like an alien.  It did have a weird shape to it. 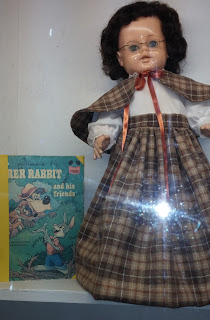 This doll we both liked as she looked like a prairie girl might have.  We both loved seeing the Brer Rabbit book next to her.  We both loved that book and the movie growing up.

READING:
I finally finished The Buddha from Brooklyn by Martha Sherrill.  Martha's is a writer and this was her experience of meeting a woman who became known as Jetsumma Ahkon Lhamo.  She was believed to be the reincarnation of a female Tibetan saint. I've tried to figure out how best to describe this book and the best I could come up with was it's a biography but a biography not only about Jetsumma but also the people and the events at the Poolesville Center she founded, which was the largest Tibetan Buddhist center in America at that time. The writer spent about two years researching and getting to know Jetsumma and the people at the Poolesville Center.

The book was not what I expected.  I guess I expected something like reading a biography on Mother Theresa and the wonderful things she did.  This story starts out with a similar expectation but the tone changes about half way through. There were points I was so discouraged with it I nearly stopped.  I brought back some bad memories of my own regarding religion.  It also brought up issues that caused me to really think.  The author went through similar thoughts herself.  Questions arise such as was she really was a reincarnated llama? Was this a cult?  Were her teachings really a new Westernized version of Buddhism or was it New Age ideas with similarities to Buddhism? I believe this did develop into a cult although it didn't start that way. That the Dhalea Llama never visited Jetsumma or her Poolesville Center and would not receive her when she visited India on several occasions makes me feel that he did not recognize her on many levels.