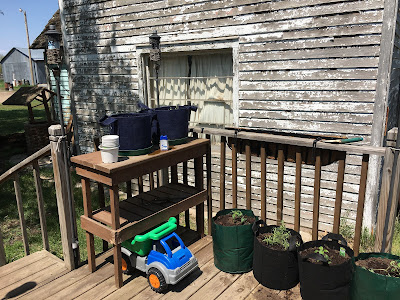 May is here with it's blowing winds and warming days (FINALLY!!!). Vacation plans are starting to push to the front as we prepare to leave for another bike vacation in June. My big news is I gave notice and started working at my new job this week!!! I have to get up earlier though so I'm working on reprogramming my body to get up a little bit earlier each week and hopefully I won't be too sleep deprived. It's so nice to be done at 2:30 pm though!

Other news on the homestead is that we have a house Mr. B bought to move down to our homestead! I'm still getting my head wrapped around it. All the plans I'd had for fixing things in the trailer or now on hold. He's hoping we can get everything moved, the ground leveled, and the foundation put in by winter and then move it down in the spring. It will be at least a year, possibly two, before we will be able to move into it. The inside has some cosmetic things that need to be done before we move in. The outside will need to be painted and a new roof put on. 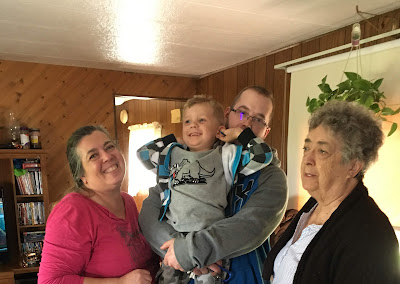 My mom arrived for a week-long visit last week. The winds were high and the weather cold while she was here so several outings I'd planned (namely going to the Peace Gardens) didn't happen due to the weather. I'd hoped we could spend some time outside doing things like having her help me plant my patio garden and some flowers, but that didn't happen either. What did happen was we got to spend a lot of time indoors relaxing and watching TV and/or working on our craft projects. We also did some bird watching out the window as we have a beautiful yellow finch that has visited us.

Lil dude came up and spent a week also with me while my mom was here. The last day and a half were hard as the weather wasn't nice enough for him to go out outside and work off some energy so we had some issues but otherwise he was a lot of fun to have. He got to see planes at the airport when we picked up my mom and was so excited. 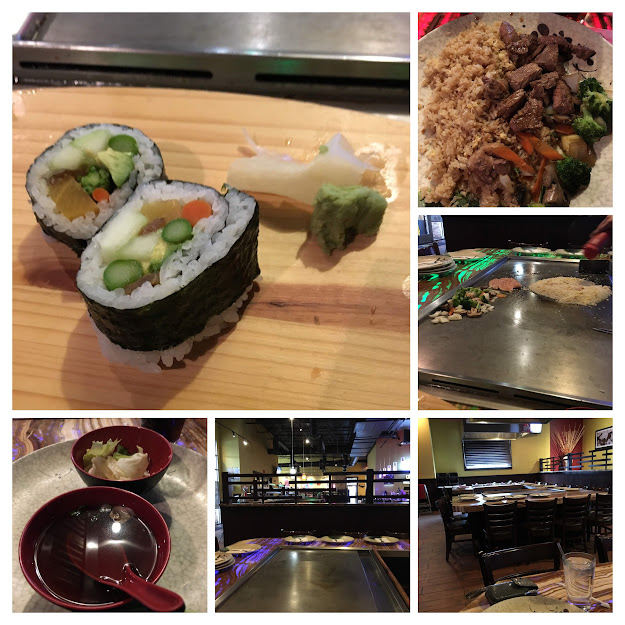 The day my mom left we tried out ND Asia Bar and Grill. They have hibachi tables or regular seating so mom and I decided on the hibachi table. It was such a good meal before she left and she had leftovers to eat for supper so she didn't have to buy airport food on the way home. I was surprised they actually had a lunch menu for the hibachi tables, normally it's a set price whether lunch or supper. I also ordered vegetable sushi, which was really good. Mom ordered chicken and I ordered steak for our meats and the meal came with a broth soup and an Asian-style salad - both were delish! I will definitely be returning to this restaurant.


One of my projects this month has been to start adding my favorite blogs to Bloglovin' so I can start reading them on Bloglovin instead of following them on Facebook. I've gotten so frustrated with Facebook and not being able to see all the blogs I follow because of their algorithms which only allow you to see the top 25 blogs/pages you look at. Considering I have way more blogs/pages I follow than that, something needed to be done.

I've also been noticing a lot of people taking hiatuses from Facebook or all social media lately. I can see the benefit in this and may consider it in the near future. I was listening to a podcast and the gentleman said he'd deleted all social media apps from his phone. Considering the average person spends over 3 hours PER DAY on their phones it's a pretty huge amount of time we could use for something more useful. 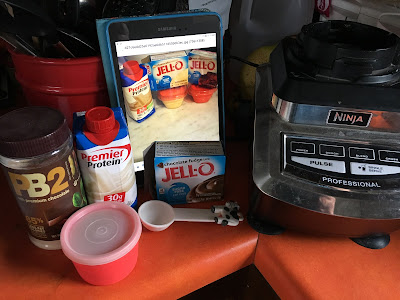 When I worked at Walmart I saw college girls constantly buying sugar-free pudding and protein shakes, I'm not over exaggerating when I say they'd buy close to 100 boxes of the sugar-free pudding at a time. I asked them what they did with all of it and they said they made protein shakes from it. So this morning I was trying to figure out something low carb to make for breakfast and decided to try it. I checked out Pinterest and decided on a combination of flavors I wanted and OMG was it good! Honestly, it was so filling I didn't drink the entire thing. I will probably start making these for my breakfasts on days I work so I can drink them on my way to work. Check Pinterest out as there are tons of recipes. Note: A package of pudding I estimate will make at least 3 shakes so keep it in an airtight container after opening.

Put all ingredients in a blender (I use my Ninja). The more ice you use the thicker the shakes will be  - so adjust the amount of ice to your preference for thickness. 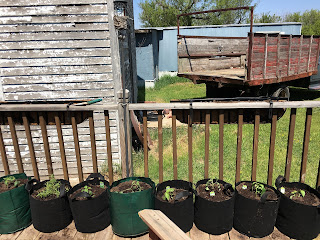 One of my spring/summer projects was to put in a raised bed garden this year. This got put on hold until we get the house moved down here to the homestead so I decided to do a patio garden to satisfy my gardening itch. I bought a package of 10 of these 5-gallon gardening bags to use as planters. I also got a package of 3 of these 7-gallon gardening bags.  I bought 4 tomato plants, jalapeno plant, anaheim pepper plant, and 2 green pepper plants to plant in these.  I used the 7-gallon bags for the tomatoes. I'll see if the tomatoes do better in the 7-gallon or 5-gallon bags. 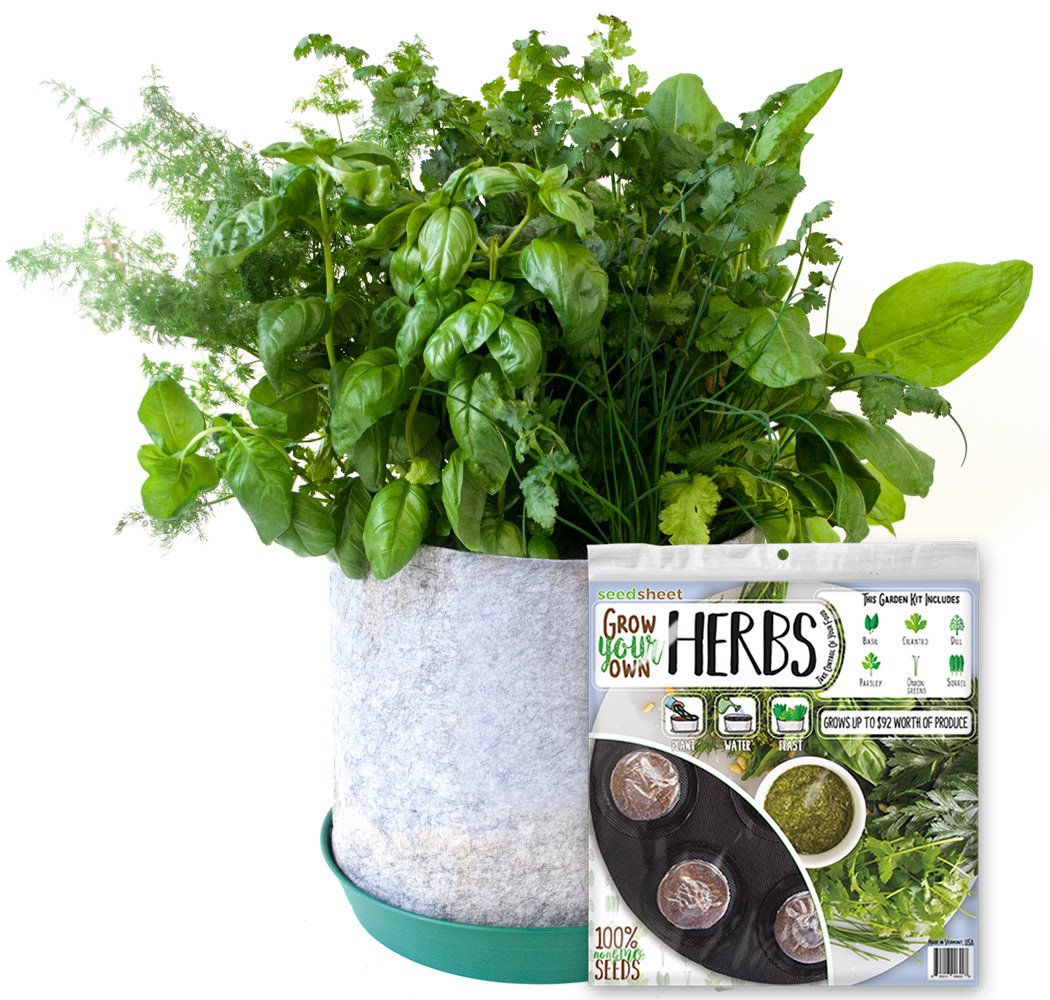 I also ordered some Seedsheets to try - I bought the salad and the herb ones. These are from the Shark Tank show, which I never watch.
at May 26, 2019