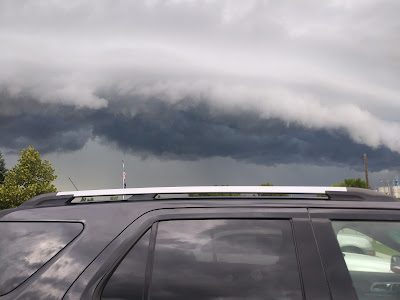 We've been having a really wet month with violent thunderstorms. We've had several tornado warnings and lots of funnels spotted.  Hot days and cool nights apparently trigger some pretty violent storms. The storms have been causing a lot of electrical outages. 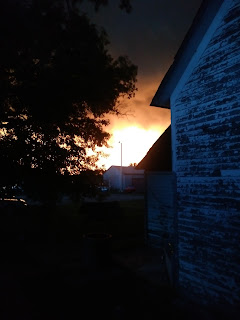 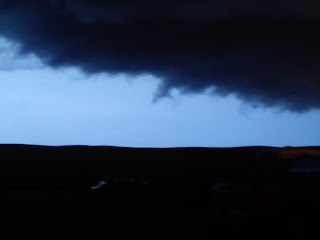 Recently while we were out on the Harley and I had an epiphany - riding on a motorcycle of any kind requires a great deal of trust.  You have to trust the person you're riding with for both riders to be safe. This epiphany occurred during a sharp turn as I started to panic he was leaning the bike too far over and we'd skid. In this case my rationale self reminded me he's been riding since he was a kid and knew how to drive the bike and I have no experience and the other part of me wanted to throw myself off the bike.  Fortunately I went with the rationale part of my brain that told me to relax and move with him.and thankfully we didn't skid. It did lead to some thought on what a thermometer riding together can be. I can't imagine a couple being willing to ride together if they didn't like each other or were fighting. Either couple would have a totally different posture while riding on the bike.

I'm sure my starting to ride at 52 is causing some of the issues and I try to figure out what is causing the issue. With my allergies I frequently have minor balance issues due to fluid in my ears.  I've moved while we were riding when I shouldn't have but I'm learning to compensate and not move when this is an issue.  One more reason why our riding as much as possible before the trip was so important. Riding together we both have to communicate with each other more instead of assuming the other person is psychic. He had a tendency to bring up things weeks later so I couldn't remember why I had done something so he's learning to tell me immediately if I did something he would prefer I not do so I can analyze why I did it and figure out how to compensate the next time.

We didn't get a lot of time on the bike in this month due to the crappy weather. We did do a day trip up to Lake Metigoshe, which is a special place for me as it's where I met Mr. B. We met a friend of his and rode around the lake with a stop for lunch at Dockside to wait out the rain. I figured it was good to ride in the rain in case we end up with rain on our July motorcycle trip to Yellowstone. On our way back we stopped in Willow City to check out the street dance. It was a long but fun day, we left about 11 am and got home about 1 am. I was highly disappointed in the band they had for the street dance. They only played hard rock - no slow songs at all. I'd never heard most of what they played. The company was great though and we enjoyed our outing.

Jasper stayed with us after Mudfest for a week. I took him with me grocery shopping in Bottineau so we stopped at the Chinese buffet there. I enjoy using chopsticks when I eat at Chinese joints to keep in practice. Jasper looked at me take a couple bites with my chopsticks and reached over and grabbed them. I'm not sure he quite got how to use them - at one point he'd stabbed watermelon pieces on each end of one chopstick and had chicken on the other chopstick. It was pretty hilarious to watch. 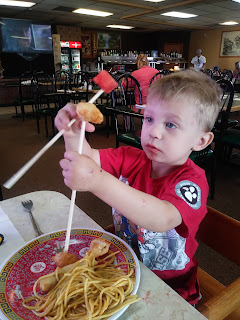 The annual Mudfest was held in June. Mudfest is guys or gals taking their trucks out through a mud hole or in this case it was a muddy slough.  Normally the trucks are stripped down and are only used for these events. There are large tractors to pull any trucks out that get stuck. I'm not sure what the official tally was but would estimate there were about 30 trucks there despite the weather being crappy.


My son and grandson were up to attend. At the last minute we decided to provide food for the Mudfesters. Jordon stepped in and acted as my griller and I worked the table taking orders and dealing with the money. We hadn't expected the day to be so cold or I would have taken some hot chocolate instead of all the cases of water. It was fun watching all the trucks getting stuck. Dustin blew his on the third time. As you can see the trucks get VERY dirty and their drivers tend to get just as dirty. 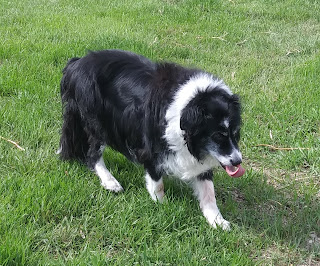 We had two pet deaths this month, a week apart. My border collie, Lacey, passed and then the following week Mr. B's toy Yorkie, Dixie, passed. Lacey was about 16 years old. Dixie hadn't been able to walk in about 10 months and the vet feared if she used anesthesia to do further testing to try to figure out what was wrong it would kill her so Mr. B decided he wanted to wait it out. She was only 4 years old but had a lot of health issues. Both are buried behind the house in the pet cemetery. 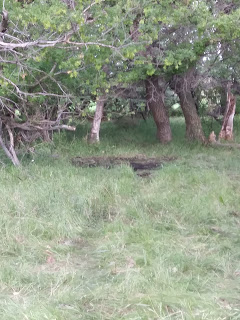