We had awesome weather this weekend with temps in the 60's and they said 70's, although it didn't feel quite that warm.  The sun was beautiful and the wind was on the calmer side.  We had some windy weather earlier in the week with gusts over 40 mph for several days.  Oreo was insistent that she wanted to be outside even with the winds.  Poor thing had to brace herself or the winds might have blown her away like Toto.  We really need to come up with some type of fence so they can hang outside without me being with them.

The pups and I went out for a walk Saturday evening. We live close to the entrance of the White Cloud Trail.  Amazingly enough I've never tried hiking any of it before.  The trail loops throughout the city and is approximately 10 miles long.  We aren't quite up to that long of a hike yet but I decided we'd try a mile or so of it from the entrance.  It follows a dirt road along the James River to start.  There was a drop in the river which created a nice little rapid. It was nice and peaceful even though there were houses on the other side of the river.  It would probably be a good place to fish once I get my license.  I realized that I need to get some flea preventative immediately and I need to see what the vet suggests about ticks as I'm sure they'll be coming out soon.  There were mosquitoes out in full force along the river so I'll need to remember to use or bring bug spray/deterrent.  I used my pedometer and we walked 2.28 miles.

I couldn't do much cleaning so I crocheted another rag rug and finished it.  This one is a rectangle done in red, white and blue.  Very patriotic.  I used a 1.5" strip instead of a 2" strip so I got the more holey appearance to it then the green one I did.  I did manage to give myself a blood blister on one of my fingers from the scissors.  I would have started another rug Sunday but my finger hurt so bad it will have to wait. 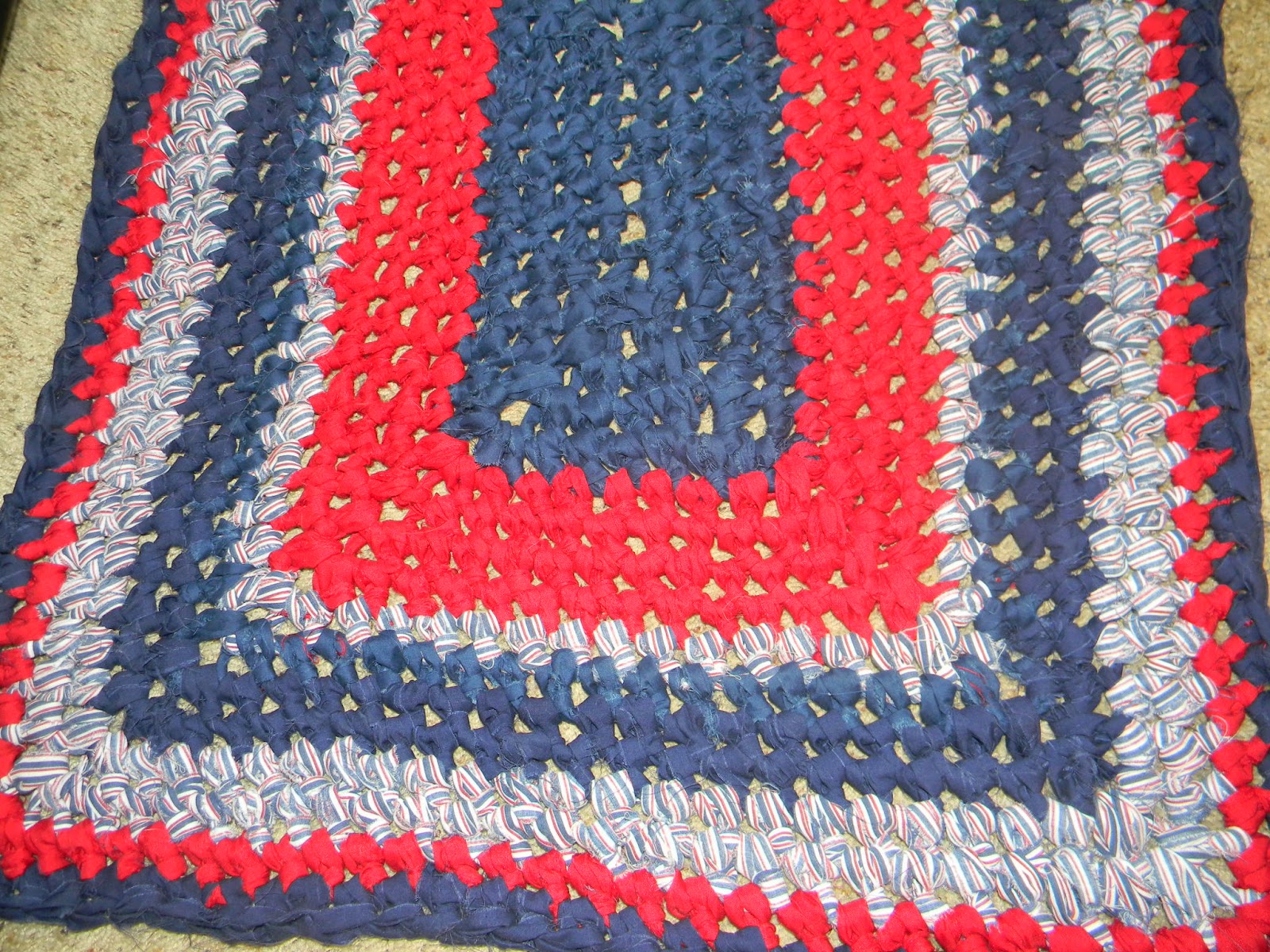 I ordered a deluxe video set from Rag to Rugs by Lora and I can't begin to say how helpful the video was. She starts from how much fabric to use, how to crochet, how to make oval, round, and rectangle rugs, and how to join strips so you don't get a stair step in the row from color to color.  The deluxe set came with the Q hook, patterns, and crochet stitch markers.  The cheat sheets are AWESOME!  I'd initially planned to make another oval but after watching the video I decided to make the red, white and blue rug a rectangle instead.  I thought the rectangles looked pretty neat.

Matt spent the weekend working on the lawn and it looks awesome compared to what it did before. Sunday  evening Matt decided he wanted to do something outside with the pups and I so we went down to the Reservoir and walked along the paved path along the lake.  It was so beautiful out with just a smidge of a breeze.  We both assumed that the bridge to the island would be closed due to flooding but it was open. We'd walked so far by then we knew we couldn't handle crossing the bridge and walking the island as well. I also need to get some needle nosed pliers to pull sand burrs out of the dogs paws when we're walking in that area.  I forgot my pedometer but I'd say we probably walked closer to 3 miles on this hike.