Time is flying so quickly I didn't realize I hadn't posted anything on the blog. Spring is a busy time on the farm with calving, field work and getting all the summer toy ready. Mr B has been working 12 and sometimes 14 hour days in the fields. They finally finished seeding this week so he'll be back to banker's hours again thankfully. It's hard preparing food for him at 10 pm or later so he has at least one hot meal a day especially when I have to be up at 4:30 am.

Here are some highlights from the last couple months:

Easter arrived after a night without electricity at the farm. We'd just brought the kids in to take baths and Desiree was getting ready to take Bella home for bed when the electricity went out. I bought several old fashion oil lamps way back when I lived in Maine and found them extremely useful. I lost them somewhere in my moves so started picking them up again at yard sales and thrift stores when I found ones I liked. I definitely need a few more but the ones I have were extremely helpful. Desiree and Bella stayed here for a while as Bella was a bit spooked by the electricity going out. Bella and Jasper played together with his blocks for quite a while. It was such a nice relaxing evening despite not having electricity. We like to use what we have and the kids needed something level to build blocks on so I grabbed my cutting mat and they used that. They'd gotten a good size castle built before they both went to bed.

We had five calves this spring and two of the calves were born over the Easter weekend. Bella names them Ferdinand and Lana. We had to move Ferdinand into the shop because it was so cold out so he didn't freeze while we got an area set up for him. It was hilarious because he kept trying to charge Dustin even though he was only a couple hours old and still wobbling around on newborn legs. Jasper was so adorable helping us move broken bales of straw to the stall for bedding. He'd grab handfuls of straw and toss them between the bars of the panels and I'd use the pitchfork to grab the straw and toss it into the penned area. Every time we went out to check on them he'd run into the area with the bales of straw to help.

The biggest news for April was Hadlee's birth on April 24th that I got to assist in. It was a rough delivery and both mom and baby had problems but thankfully both are doing well now. Hadlee had to be transferred to a larger hospital in Grand Forks that had a NICU. 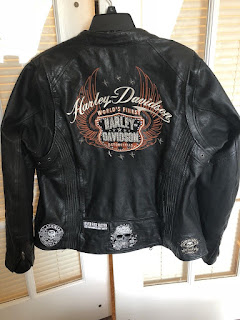 I bought a new-to-me Harley Davidson jacket off Ebay for trips on the Harley. The day it arrived the batteries were dead in Hadlee's bouncer so it was a good excuse to run into Rugby on the bike to pick some up and I could test out the new jacket. Any excuse to get on the bike is good 😊😊😊 We're planning a bike trip in July that will take us to Montana and Yellowstone Park.

I've been spending a lot of my days off with Mr B in the tractors so we have some time together, otherwise I wouldn't see him very much if at all due to our work schedules. He even let me drive the tractor one day! I knew it was a bit complicated but WOW it definitely requires some serious multi-tasking skills on turns, otherwise, they drive themselves. I think I need some training on one aspect of it at a time instead of having to remember everything. There's turning off the painter on the GPS, raising the disks (but not too much), making the turn, lining it back up, turning the GPS driver back on, lowering the disks and turning the painter back on within about 30 second time span! The painter feature allows you to look at a field and know how much you've completed and how much still needs to be done. You upload the information for your fields to the computer and then create an overlay each time you do anything to the field so there's a record of everything that's been done and what is planted in the field.

This weekend for Memorial Day we went to the lake for a good portion of the day Saturday and enjoying the sunshine while playing in the kayak and on the jet skis along with grilling for everybody. We also had a surprise birthday party to attend. Today the kids are sunburned and tired so it looks like we'll be taking off on the bike and we have a graduation party we will be attending this evening.  I have to work Memorial Day.
at May 27, 2018